The Vandalia High School baseball team picked up its third win of the season on Tuesday afternoon, a 13-0 drumming of Mulberry Grove.

"I thought we did a nice job all around today," Vandalia Coach Luke Hohlt said. "You want to take advantage of every chance you get. Even though the score was that different, you just have to keep playing ball."

Hohlt took the game as an opportunity to try out some more bench players and make changes to his lineup, to see if players would be more productive in different spots.

"I really liked what I saw from some of the guys who don’t get regular playing time," Hohlt said.

"That’s what we’re going to have to do, keep mixing things up until we find a lineup that works for us, because we have got to start winning some ball games," he said

Vandalia hosts Pana on Friday at 4:30 p.m. in a big conference matchup. Tuesday they face Altamont on the road at 4:15 p.m.

Last May, it was T-Town that ended the Vandals’ season in the regional. Monday night’s 13-3 loss to the Wooden shoes didn’t carry as much weight, but still stung.

Vandalia played evenly with T-Town through the first three innings, but once the Wooden Shoes had seen Trevor Montgomery on the mound once, they began to hit him better the second time through the lineup.

T-Town plated four runs in the fourth inning, aided by a couple of errors in the field by Vandalia’s defense.

Vandalia finally got on the board in the bottom of the fifth, scoring three runs, to make it a 4-3 game.

Matt Hoffman drew a leadoff walk and Montgomery followed with a double to put two in scoring position. Kyle Hawkins loaded the bases with a walk, and Codey Norris, who has had one of the hottest’s bats  on the team, delivered once again with a single to left-center that scored two.

"That was a great job by Codey," Hohlt said.

In the top of the sixth, everything started to go badly for Vandalia. Montgomery allowed a run to come in before Hoffman was brought on to pitch. He surrendered a run that was charged to Montgomery and gave up a run of his own. T-Town had five hits in the inning and scored two of its runs with two outs on the board.

The Vandals’ hitting, which had been strong in the fifth, disappeared in the sixth and seventh, as they managed only one hit in their final two at-bats.

Leading 7-3 going into the seventh, the Wooden Shoes plated six more runs in the inning as Vandalia was plagued by walks and errors.

Montgomery went 2-for-3 at the plate, but took the loss on the hill, going 5 2/3 innings, striking out six and walking three.

Norris had two runs batted in.

"That’s what we need to see, guys coming through in the clutch," Hohlt said.

The Vandals’ lineup was broken down into three groups against Carlinville, those who got on base, those who drove them in and those who went a combined 1-for-11.

The top three batters in the lineup, Craig Freeman, Berning and Ryan Thiele, reached base a combined six times and scored all six of the team’s runs. The next three hitters, Hawkins, Hoffman and Montgomery, had six total RBIs, four of which were by Hoffman. He hit a three-run triple in the top of the sixth.

Matt Grove had the bottom of the order’s lone hit, a single in the fourth.

Vandalia’s offense was battling back the whole afternoon, after giving up six runs in the first inning. Hoffman’s triple in the sixth tied the game, 6-6, but the Vandalia defense and pitching staff couldn’t contain Carlinville’s offense in the bottom of the sixth, giving up three runs.

Codey Norris leaps on to home plate ahead of a throw in from the outfield. 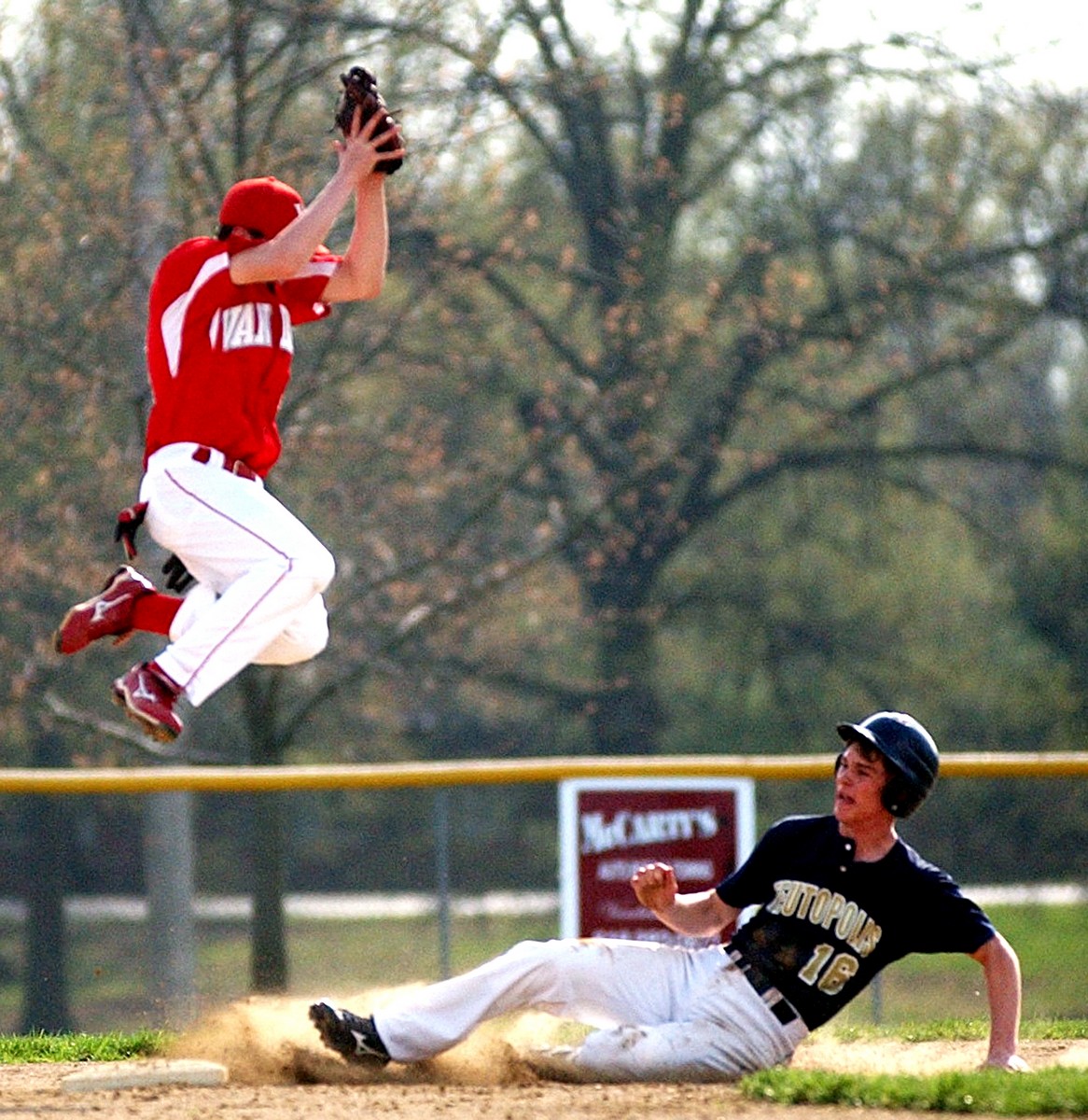 Dathan Berning has to jump to catch the throw down to second and avoid getting cleated by the T-Town runner. 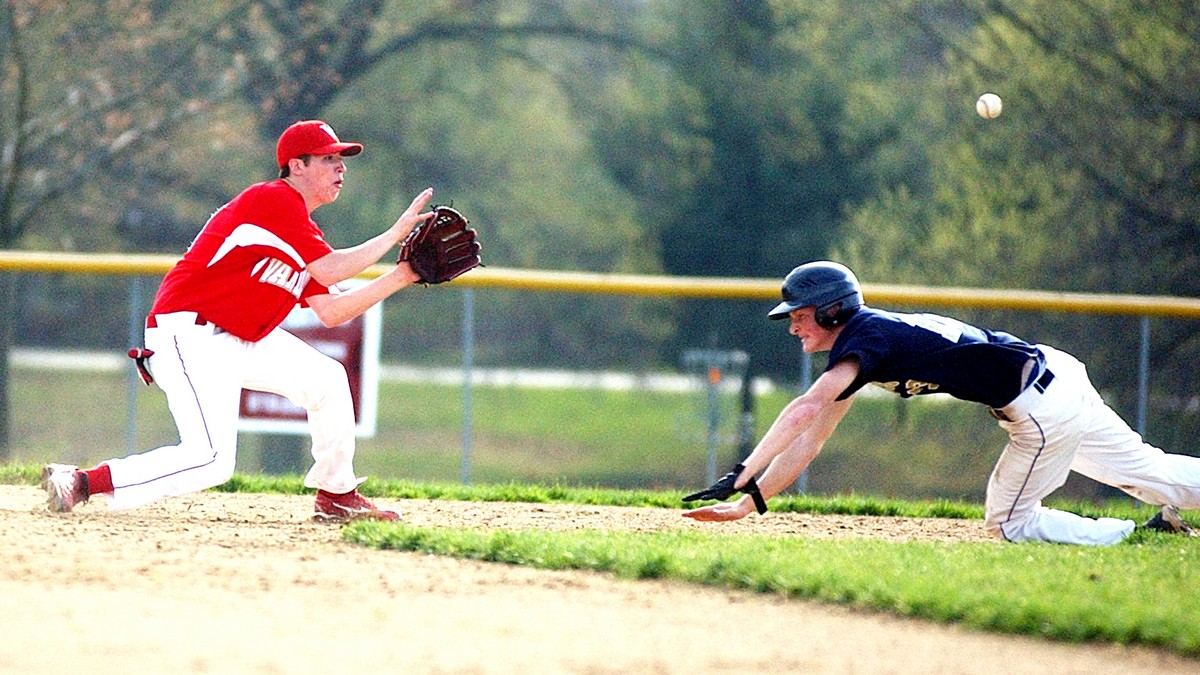 Matt Hoffman gets around on a pitch and drives in a run against T-Town. 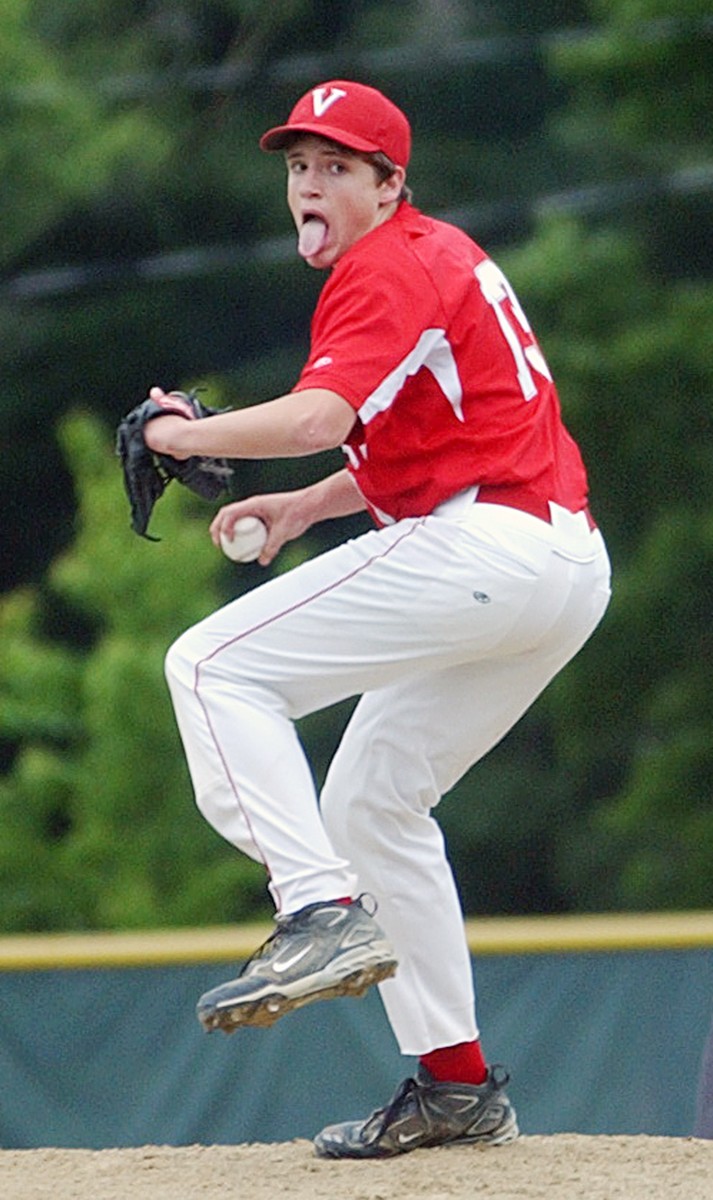 A Teutopolis baserunner gets a jump on Vandalia pitcher Trevor Montgomery during the third inning of Monday night’s 13-3 loss to the Wooden Shoes.