"We have to go play," Vandalia coach Kevin Jackson said to his team at half time.

The simple and obvious statement  shook Vandalia out of the vegetable torpor that it had fallen into in the first half against Hillsboro on Tuesday night.

The Vandals went on an 8-2 run to start the third quarter and take control of what was a four-point game at the half, in recording a 54-42 win.

"We had more movement (in the second half). We were more active," Jackson said. "For some reason or another, we just came out (in the first quarter) and weren’t ready to play."

Vandalia fell behind early against Hillsboro, as the Hilltoppers took a 6-0 lead in the opening minutes. With the game getting out of hand early on, Will Cowger and Marty Johnson accounted for all of Vandalia’s first quarter points, making it an 11-10 game after the first period.

Despite getting back in the game and eventually taking the lead in the first minute of the second quarter, Vandalia still seemed flat and was making a lot of mistakes, particularly with taking care of the ball. The Vandals had 12 turnovers in the first half alone.

Vandalia’s 8-2 run to start the second half gave it a 10-point edge, which it was able to hold and expand to 12 by the end of the third quarter.

"In the fourth quarter, we decided that the game was in hand and that we could start jacking up whatever we wanted," Jackson said. Vandalia’s poor shot selection early on let the Hilltoppers back in the game.

A run by Hillsboro made it a six-point game and forced Jackson to burn a timeout to stop the run. Out of the timeout, Johnson hit a three and Vandalia was showing the same intensity it had shown in the third quarter.

Vandalia outscored the Hilltoppers 15-9 in the final five minutes and kept them off the scoreboard for the last two minutes of the game.

Johnson had 19 points and was 5-for-8 from two-point range. Bryan Hosick had 11 points and five rebounds.

"Bryan was more aggressive tonight. We’ve been asking for it from the whole lineup, but it’s something that the individual has to do," Jackson said.

Vandalia shot 53 percent from the floor, well above the season average of 40 percent.

The win moves Vandalia to 10-8 overall and 6-0 in the conference. The Vandals are in the midst of a five-game home stand, and play two more times this week. Friday night, they play Litchfield, which they beat 43-27 earlier in the year. The junior varsity tips at 6 p.m., with varsity to follow. On Saturday, Vandalia hosts Columbia at 6:30 p.m.

With an extra game this week, Jackson said he is cutting back practice time some to try to save some energy.

The junior varsity was victorious on Tuesday night, as well. They beat the Hilltoppers 54-42. Daniel Bell and Nathan Henna had 10 points. Dathan Berning scored a team-high 12.

Vandalia stepped out of conference play on Saturday night and got a nice win over Shelbyville to boost its confidence. The Vandals faced Shelbyville back in December at the Vandalia Holiday Tournament and lost in the final seconds, 52-51. Saturday’s outcome was a lot different, as Vandalia won easily, 47-29.

Boarman, who is Shelbyville’s best player, had one of the best VHT performances anyone has seen in years as he averaged 26 points a game.

"When you’re minus a player, that’s a big, big part," Jackson said, knowing full well of what Boarman is capable of.

His 26 would be missed by the Rams on Saturday as they could not keep pace with Vandalia.

The Vandals took a 13-7 lead in the first half, as everything they put up seemed to be falling.

Dylan Durr showed off his talents and basketball smarts in the first quarter, as he took his man one-on-one as he bought the ball up the court. Durr drew a foul as he came across mid-court. The risky move could have gone either way, but Durr got the call and frustrated his defender. Just seconds later, still fuming from the call, the defender committed a frustration foul on Durr and was on the bench with three fouls in the first couple of minutes.

"He (Durr) was probably a little lucky on one of two of those that he didn’t pick it (the foul) up," Jackson said.

Vandalia’s defense held the Rams to only four points in the second quarter.

Vandalia hit three three-pointers in the second quarter to stretch the lead to 14.

"I thought our guys did a good job defensively," Jackson said. "I thought on the night we were good defensively. How many times did Shelbyville throw it just straight out of bounds when we were denying? I just thought that overall, we were positioned good and had decent pressure."

The lead was never in jeopardy in the second half and Vandalia took the easy win.

Will Cowger had 13 points and was 6-for-9 from the field. Vandalia shot better than 50 percent on the night, and 10 of the 11 Vandals who saw action scored. 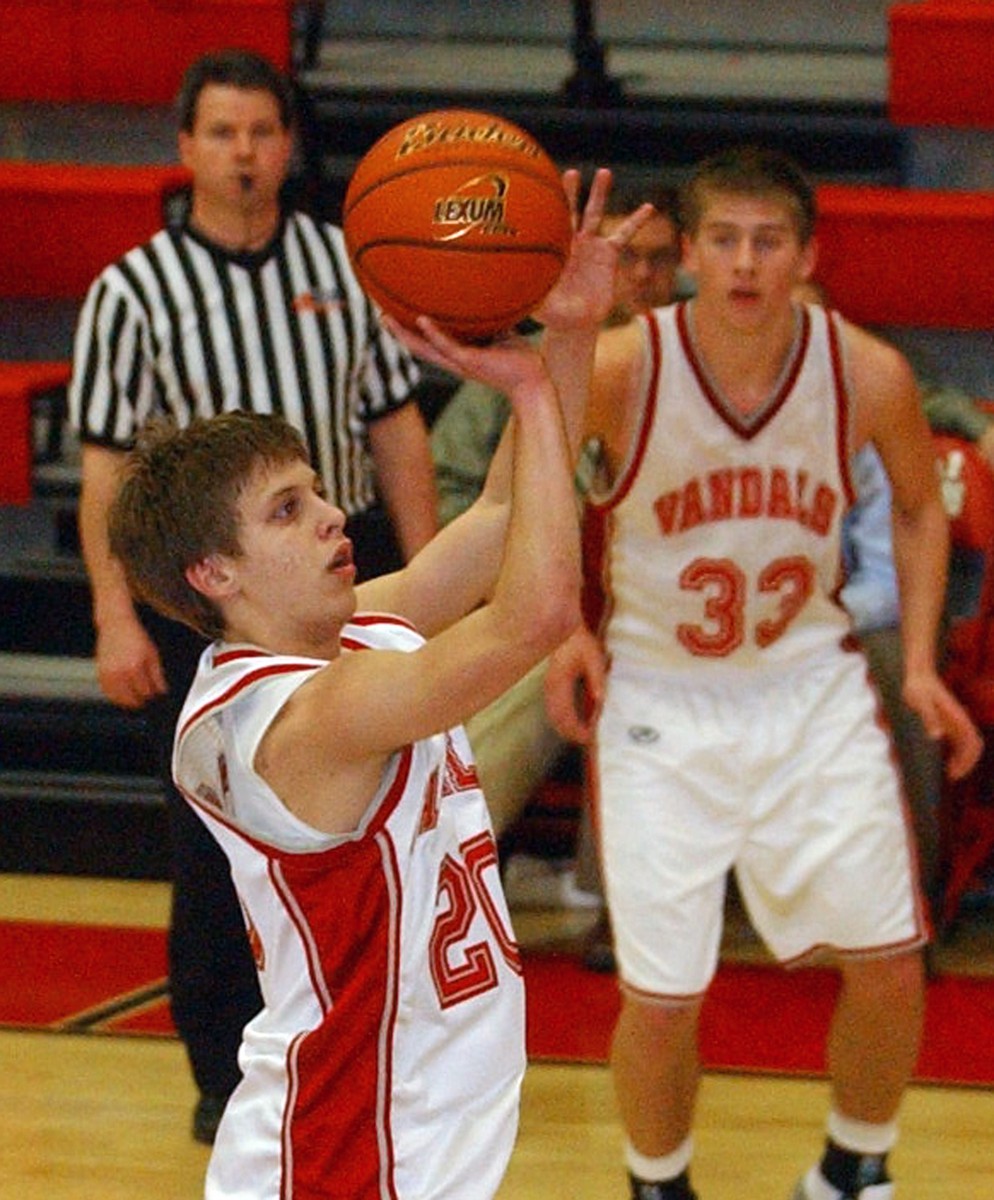 Tim Ritchey pulls up and pops a shot from the free-throw line on Tuesday night.

Will Cowger gets the ball down low and banks it in for the score during Vandal’s third quarter run against Shelbyville. 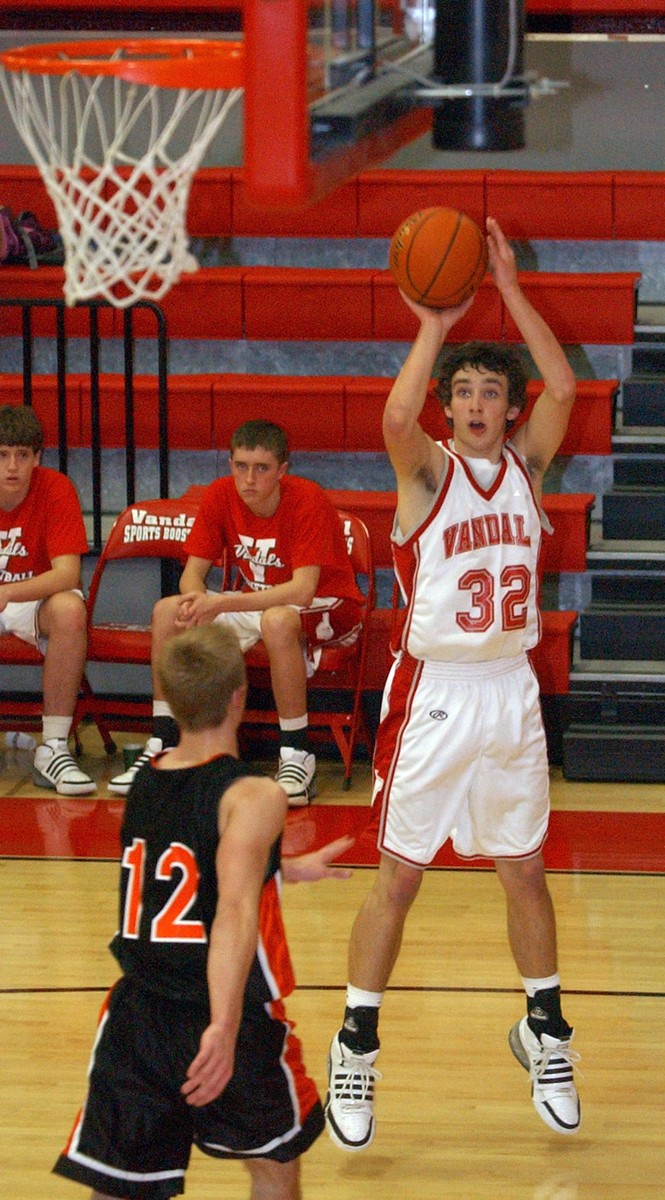 Bryan Hosick pulls up for a 15-foot jumper during the third quarter of Vandalia’s win against Hillsboro. Hosick had 11 points and a team-high five rebounds. 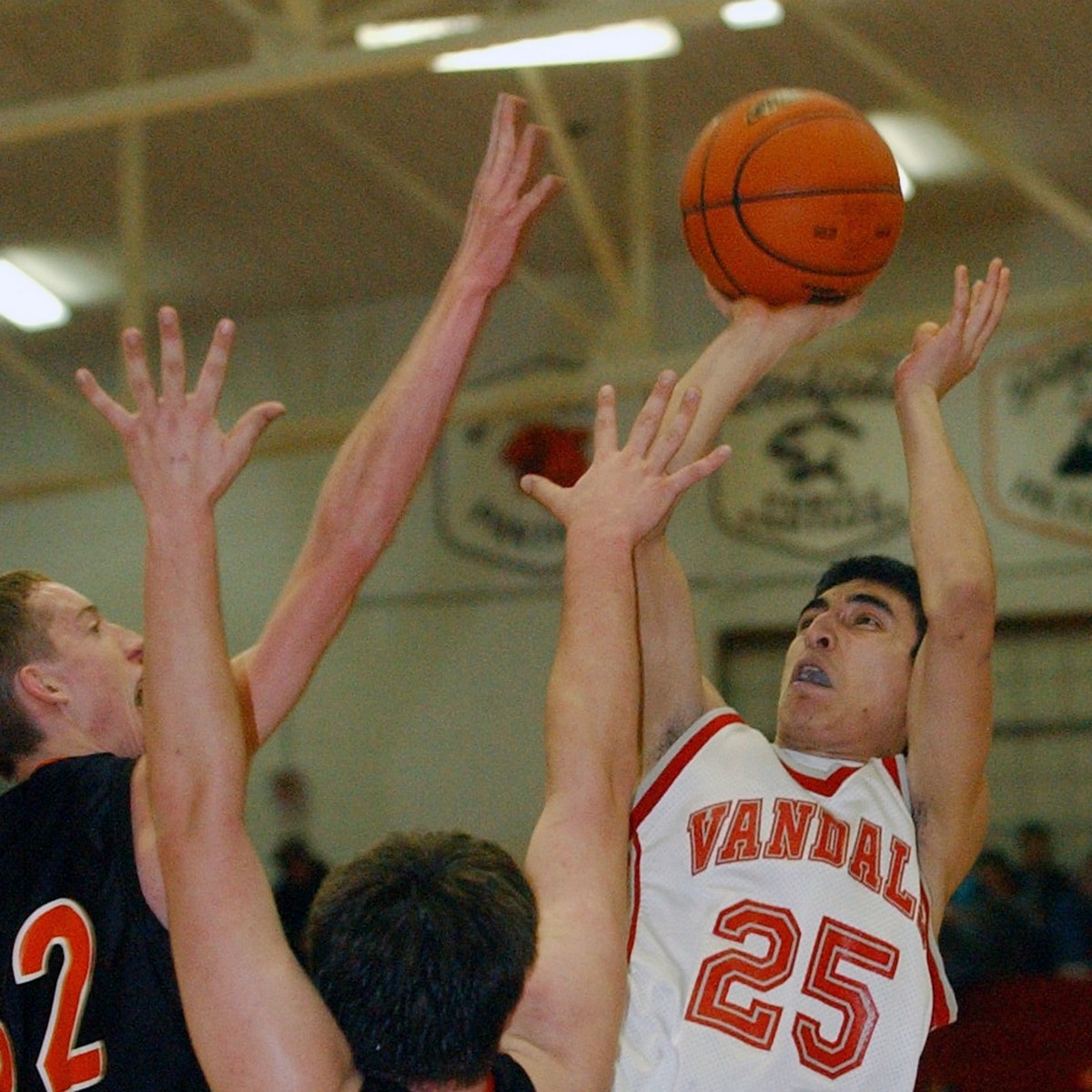 Angel Osorio soars to the basket during Staurday night’s game against Shelbyville.

Marty Johnson rises above to lay in a basket against Shelbyville on Saturday. Johnson had four points.