One of the top students in his class, South Central senior Isaac Grapperhaus has always been good with numbers.

That said, the 6-foot-5 center knew that although his statistics from his junior season were good – 14.2 points and 9.4 rebounds per game – they needed to be better during his senior year, as the Cougars were losing four varsity regulars, including team MVP Will Crain.

"I decided this year I needed to step up and do more," Grapperhaus said. "It just seemed like I needed to be more aggressive for the team to be successful.

"I needed to get more points and more boards for us to win."

The 2009 Leader-Union Boys Basketball Player of the Year did just that – upping his scoring by more than 5 ppg while grabbing three more rebounds per contest.

Thanks in large part to that improved play – along with that of dynamic sidekick Tanner Bushue – South Central did a lot of winning, putting together a typically Cougar-like 23-7 season in what many felt might be a rare down year for the program, especially following a 2-4 start.

And not only did Grapperhaus put up bigger numbers – he did so with a level of consistency that bordered on remarkable, starting the season with a string of 20-straight double-doubles. He wound up scoring in double figures in all but three of the Cougars’ 30 games, despite opposing teams’ constant efforts to slow him down with every defensive tactic known to man.

"He’s a force," said longtime Cougars coach Gary Shirley of the only area player to average a double-double. "He carried us.

"He’s had to do an awful lot by himself, along with Tanner," Shirley added. "Those guys have seen a lot of pressure. I’m pleased with his effort."

The key to Grapperhaus’ transformation from a good player to a dominant one was clear to anyone who saw him play early on in his varsity career.

Once content to settle for 12-foot jumpers, Grapperhaus embraced the paint.

"For the most part, he got tighter to the basket this year, so when he did miss, he was getting putbacks," Shirley said. "That’s something we talked to him about last summer, and he did a better job of that."

Grapperhaus agreed with his coach.

"I just started squaring up to the basket more," Grapperhaus said. "Shirley was always on me to square up. Rebounding, it was just having quicker feet and getting inside more."

After embracing his role a legitimate big man, Grapperhaus discovered that many opposing teams with vertically challenged post players simply had no answer for him.

Grapperhaus picked up right where he left off at the end of his junior season – when he averaged 19 ppg in the Cougars’ final eight games – making the St. Elmo Holiday Tournament team as part of a strong start.

But his true breakout performance came two weeks later at the Vandalia Holiday Tournament, where he averaged 22.4 points and 12.4 rebounds per contest in five games.

But more importantly, his MVP performance helped the Cougars shock the 10-team field, as South Central won its fourth VHT title this decade.

Grapperhaus went on to make the Midland Trail Conference all-tournament team, as an ankle injury late in the season proved to be the only thing that could slow him down.

"He’s just pretty consistent, getting us his 18 shots a game and making a little better than half of them, then shooting his free throws pretty well," said Shirley of a player who shot 51 percent from the floor and 74 percent from the foul line.

As good as Grapperhaus was on the offensive end, he may have been even better defensively.

The big guy’s mere presence kept many opponents from attempting drives to the basket. And when they did dare to enter Grapperhaus’ domain, they often regretted it.

"I think his defensive presence in the lane really helped us out for sure," Shirley said. "He had a bunch of blocked shots."

Grapperhaus had a pair of 10-block games the week of Feb. 6 – the latter coming as part of a triple-double in a 52-31 thrashing of Waltonville.

Grapperhaus finished the season as strong as he started it, going for 29 and 30 points in victories over Sandoval and Odin at the Woodlawn Regional.

But in a year in which he accomplished just about everything he could individually, the state-bound host team kept Grapperhaus from achieving his ultimate goal – a regional title.

Fortunately, it appears the Cougars disappointing season-ending loss wasn’t Grapperhaus’ final game, as he is likely to continue his basketball career at the collegiate level.

Illinois College in Jacksonville has shown the most interest in Grapperhaus’ services, but he has yet to decide where he’ll suit up next year.

One thing is for sure regarding Grapperhaus’ college choice – it will have to be a strong academic institution. Grapperhaus is a true student-athlete.

"You have to have academics to go anywhere. I knew that all along," said Grapperhaus, who ranks in the top-10 in his class and is considering a career in physical therapy. "I’m not going off to play in the NBA. I always knew that."

It’d also be nice if Grapperhaus’ college destination had the same school colors as South Central.

For good luck, Grapperhaus has worn the same pair of gray-and-black striped socks during road games since his sophomore year.

"I got some new ones last year, but I didn’t like them as much," said Grapperhaus of wearing the tattered footwear. "They’re torn at the top and over the years they’ve kinda gotten worn out, but it seemed like I played better with them during away games."

Though his lucky socks might clash with his new school colors wherever Grapperhaus winds up, Shirley believes he’ll excel – both on and off the court.

"At the next level, he’s probably going to have to work on footwork a little bit and probably his ball-handling," Shirley said. "But he’s got some things going for him as far as shooting the ball, and he’s a pretty smart kid.

"I think getting surrounded with college kids and all of that stuff will help him, too. I’m confident he’ll do well." 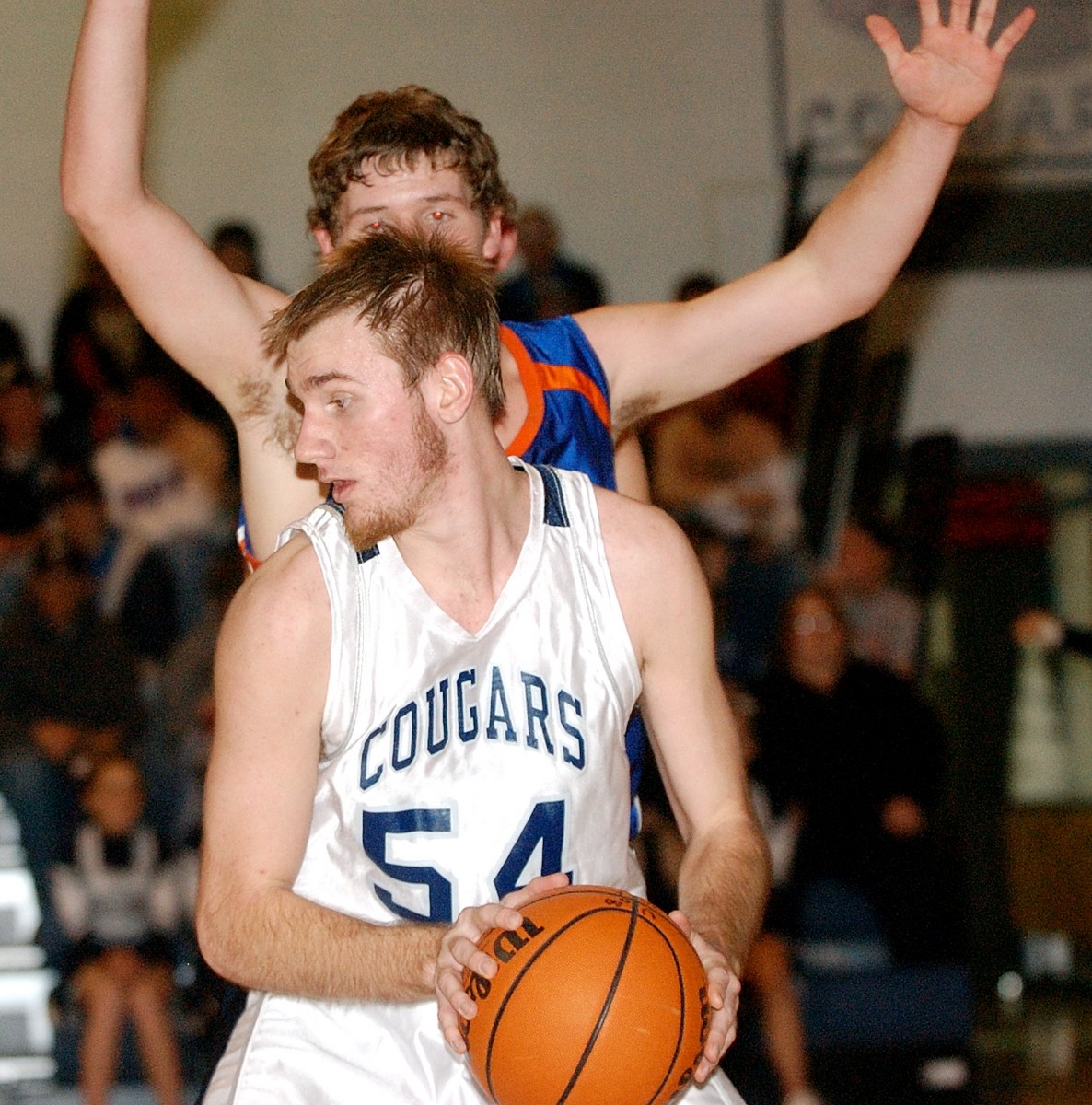 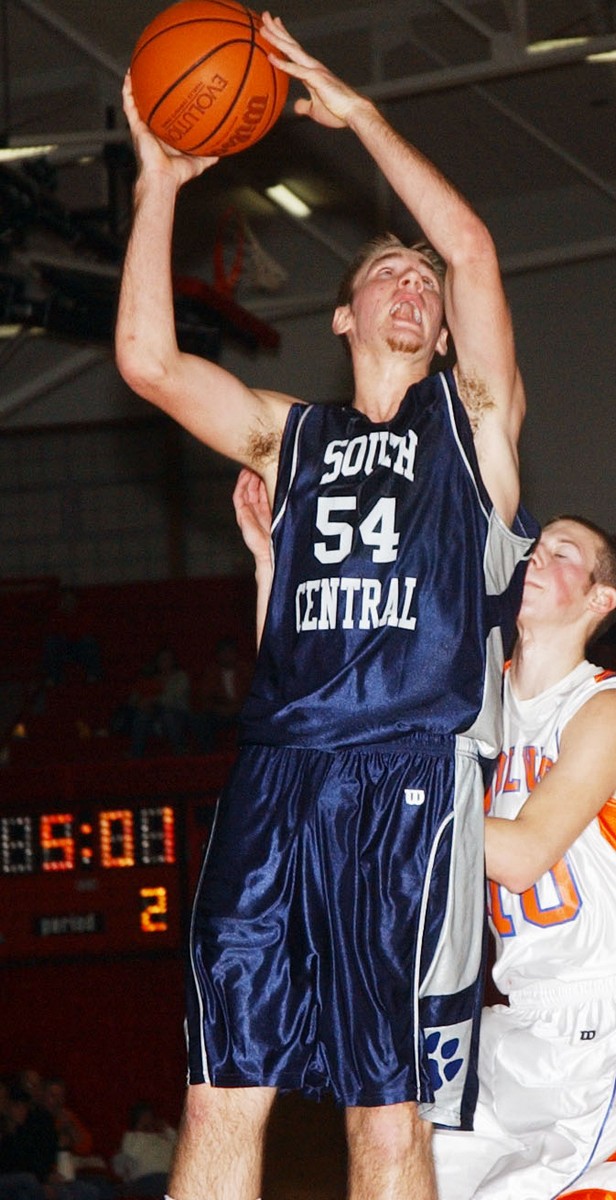 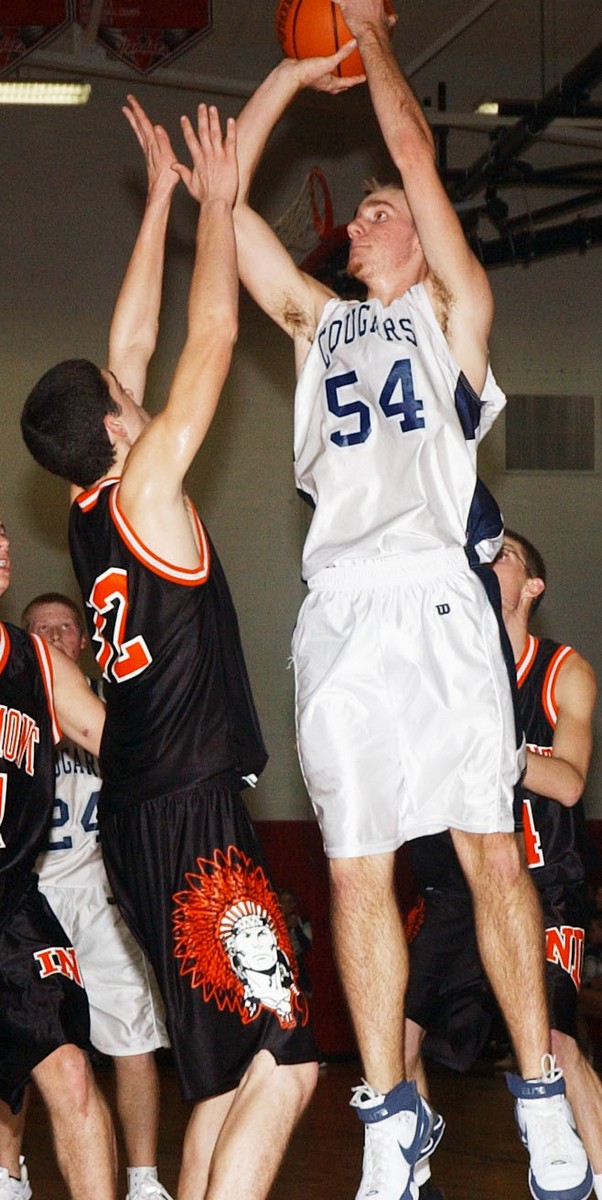 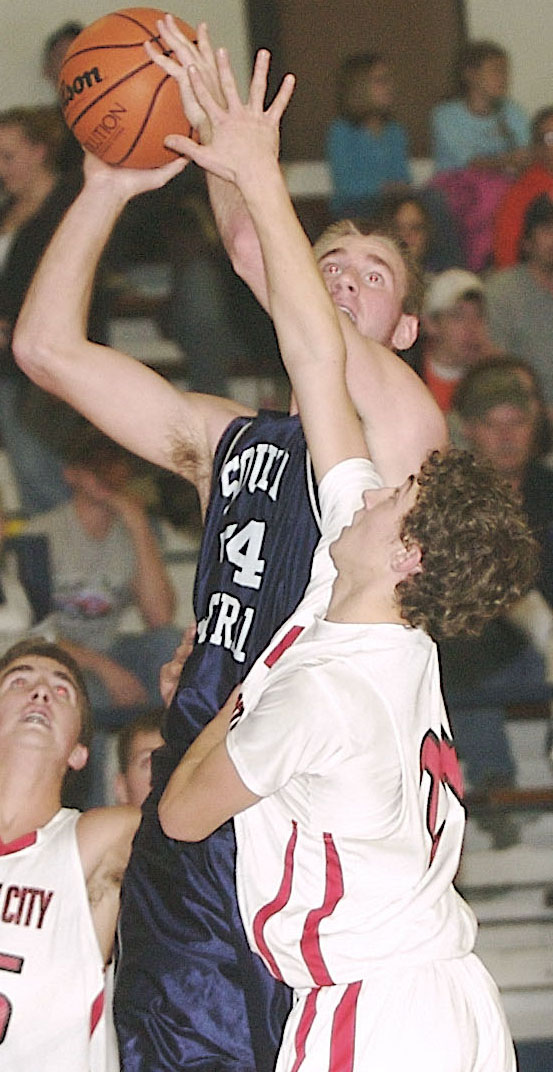 South Central’s Isaac Grapperhaus goes up for a shot against Beecher City in this past season’s St. Elmo Holiday Tournament.