Trever Pyle is at his best when he’s on the offensive.

Ultra-quick and aggressive by nature, Pyle has earned a reputation as a quick-strike artist during a wrestling career that started when he was just 4 years old.

It’s a skill that’s not only helped him take down countless opponents – but the VCHS freshman wins record, as well, during a stellar first high school season.

But on Saturday, Pyle found himself the victim of his own specialty in the Class  1A 103-pound third-place match at the IHSA Individual State Tournament.

Durrett wound up carrying a 2-1 lead into the third and final period, where – after struggling to take Durrett down from an offensive position in the second period – Pyle elected to start on the bottom.

It turned out to be a wise decision, as Pyle took a 3-2 lead by scoring a reversal with 1:32 to go. He then subdued Durrett the rest of the way to earn a bronze medal.

“He shrugged out of there and got the reversal and was able to ride the kid out,” Vandals coach Jason Clay said. “It showed he could do more than just take people down.”

By going 4-1 at state in a loaded weight division, Pyle finished with a 41-5 record – the best ever by a VCHS freshman.

The ambitious Pyle wound up attaining two of his three primary goals entering the season. And, fortunately, he has plenty of time to get the third.

“My goals at the beginning of the year were to make it to state, place at state and be a state champion,” Pyle said. “I completed two of them. Hopefully, I can complete the other one in the next three years.”

Pyle’s win over Durrett (38-7)  – ranked second in the state coming into the tournament – was his fourth of the weekend over a state-ranked opponent with at least 31 victories.

He also avenged a loss to Durrett last year at the Vandalia Open.

More importantly, Pyle completed a comeback from a disappointing semifinal defeat that denied him a shot at a state title.

But as impressive as Pyle’s narrow third-place victory was, Clay was even more pleased with his 10-4 wrestleback win over Stillman Valley’s Jeremiah Shearer.

“Sometimes kids get their heads down when they lose in the semis, because they were so close to finals,” Clay said. “Then they get beat in the wrestlebacks because they’re ripe for the picking, because their opponent’s excited about getting back in the tournament.”

Shearer had no such luck against Pyle, however.

Pyle showed no lingering affects from his semifinal loss, scoring two quick takedowns in the first period for an early 4-0 lead. Pyle then increased his lead to 6-1 with a takedown early in the second.

Shearer got back in the match with a reversal late in the second, but a takedown and a couple back points all but clinched the win for Pyle early in the third.

“I think he wrestled with a lot of determination in that match,” Clay said. “That showed a lot of toughness on his part. He was determined he was going to win that wrestleback and come back and place.”

Pyle was also bound and determined in the semifinals. But he simply had no answer for the older – and slightly bigger – Alex Jones (31-7) in an 11-2 loss.

“He lost in the semifinals, but he didn’t wrestle bad,” Clay said. “That was a junior he faced – it’s pretty good for a kid that age to make weight at 103.”

Jones got a pair of takedowns in the opening period and proved to be just as tough on defense.

“He’s pretty long and pretty tall,” said Clay of the Wilmington wrestler. “He got in on Trever’s legs a couple times and got a couple early takedowns. Usually, that’s Trever’s game to get it going with the takedowns early on. That kinda set the tone for the match.

“He did some leg rides and stuff to make it tough to score on the bottom. He got out in front and Trever just couldn’t catch up.”

Pyle opened the tournament with an 8-3 win over Erie’s Mitch Mallary (33-4) before securing a semifinal spot with a 9-2 decision over LeRoy’s Devin Bullington (32-2).

The latter match was tied 2-2 in the second period before Pyle scored a big takedown in the final minute and found himself up 9-2 after a nearfall.

“He had a great state tournament,” said Clay of Pyle’s overall performance.

Though not completely satisfied, Pyle agreed with his coach’s assessment.

“It’s an accomplishment for me to place as a freshman, I think,” Pyle said. “Everyone says I did good; I thought I did all right. I would have liked to have wrestled better against the Jones kid (in the semifinals).”

Despite his freshman status, experience certainly helped Pyle, as he went to state several times as a member of the Vandalia Junior Wrestling Club.

“I’ve been to state almost every year,” Pyle said. “I’ve placed most the time; the only time I didn’t place at state was last year.”

He’s now got his sights set on even bigger things.

“Hopefully I can get the (school) record for most wins,” said Pyle of Joe-E Smith’s VCHS record 155 victories. “It’s gonna be tough, though.”

Experience was also a factor for Vandalia’s other four state-tournament participants, but in a negative way, as Anthony Coney, Jake Etcheson, Devin Cook and Justin Hill all went one-match-and-out in their state debuts.

“I think some of them were a little cautious,” Clay said. “It’s not that any of our kids wrestled bad, but maybe they didn’t turn it loose lake they’re capable of. It’s hard to do that the first time up there.”

Hill fell to LeRoy’s Justin Meyers by a 12-3 major decision in a 112-pound opening-round match. Meyers (26-1) entered the match ranked 11th in the state.

Hill finishes just his second year of wrestling with a 25-17 record, and Clay feels the state experience will pay huge dividends down the road.

“The more experience you get, the better you’re gonna be,” Clay said. “That’ll be big for Justin going into next year. It’ll give him more confidence in himself.”

Etcheson came on strong late in his 160-pound opening-round match against Lisle’s David Pawlowicz (35-5), but wound up falling 6-1.

Like Hill, Etcheson has been wrestling just two years.

Coney and Cook, Etcheson’s senior classmates, also made their state debuts, with Coney losing by fall to Argenta-Oreana’s Kris Powers (36-10) and Cook dropping a tough 2-0 decision to Harvard’s Miguel Flores (32-12).

Cook and Etcheson both capped successful senior seasons with victories in Tuesday’s Vandalia Dual Team Sectional, finishing with records of 31-14 and 23-13, respectively.

“It was a neat thing that the seniors got to go up there,” said Clay of three of the Vandals’ four seniors advancing to state. 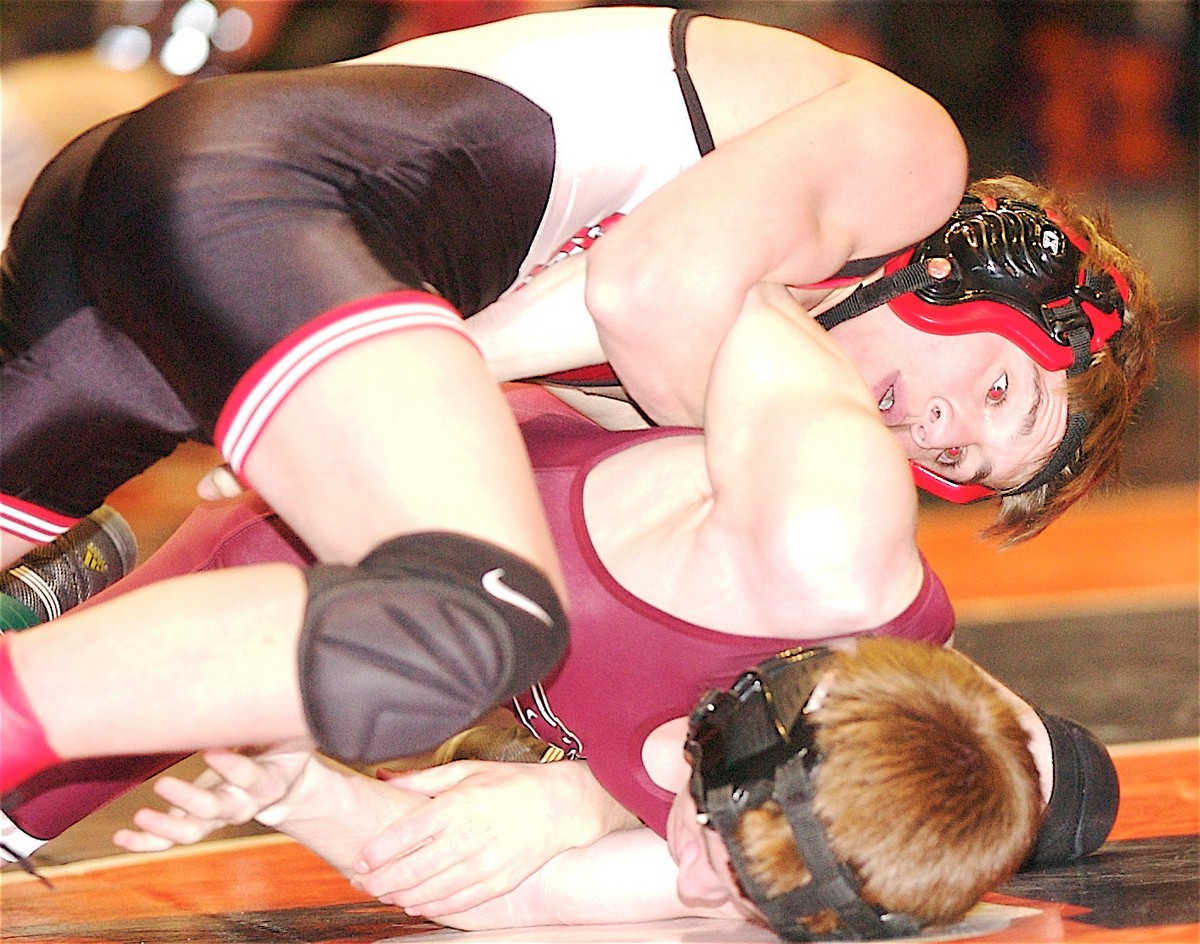 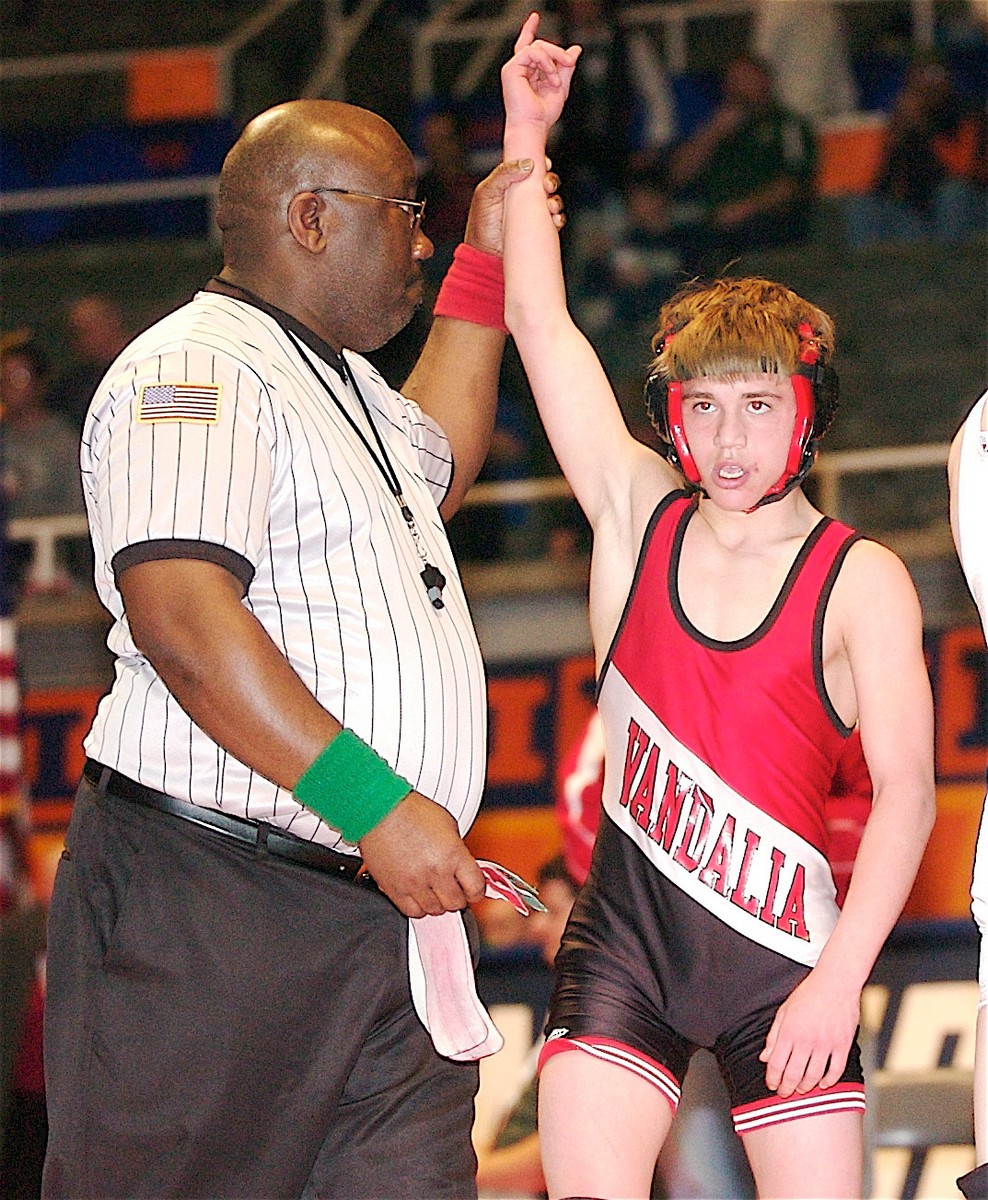 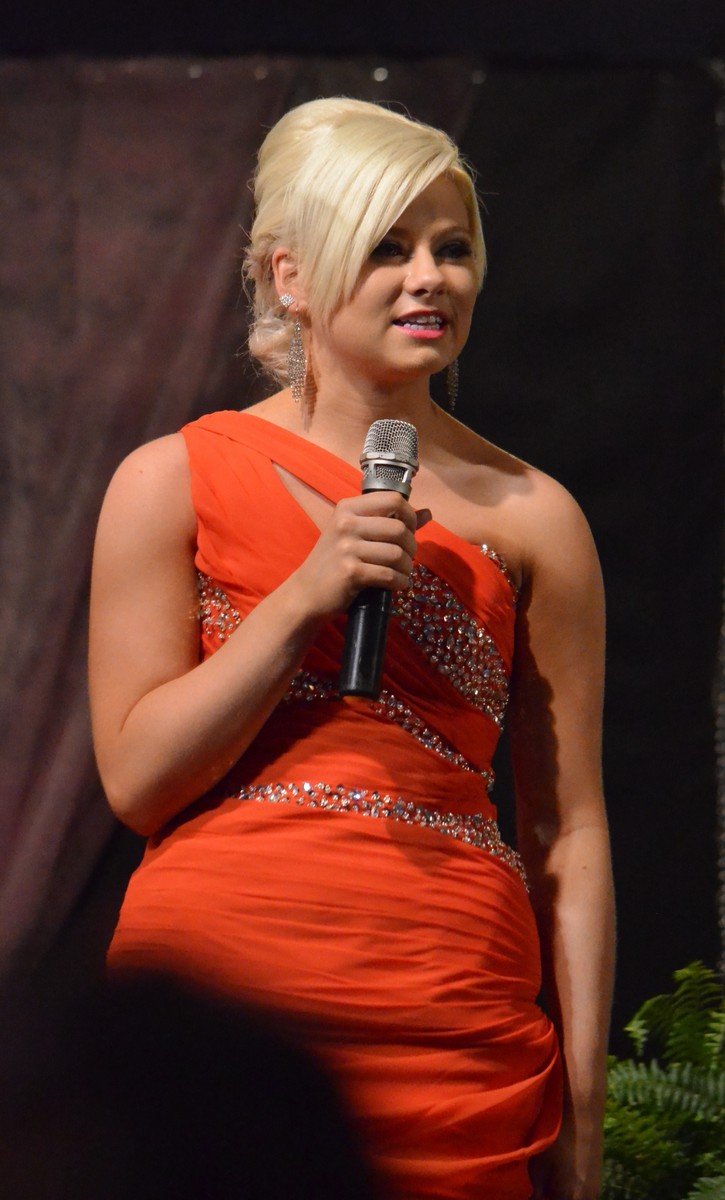 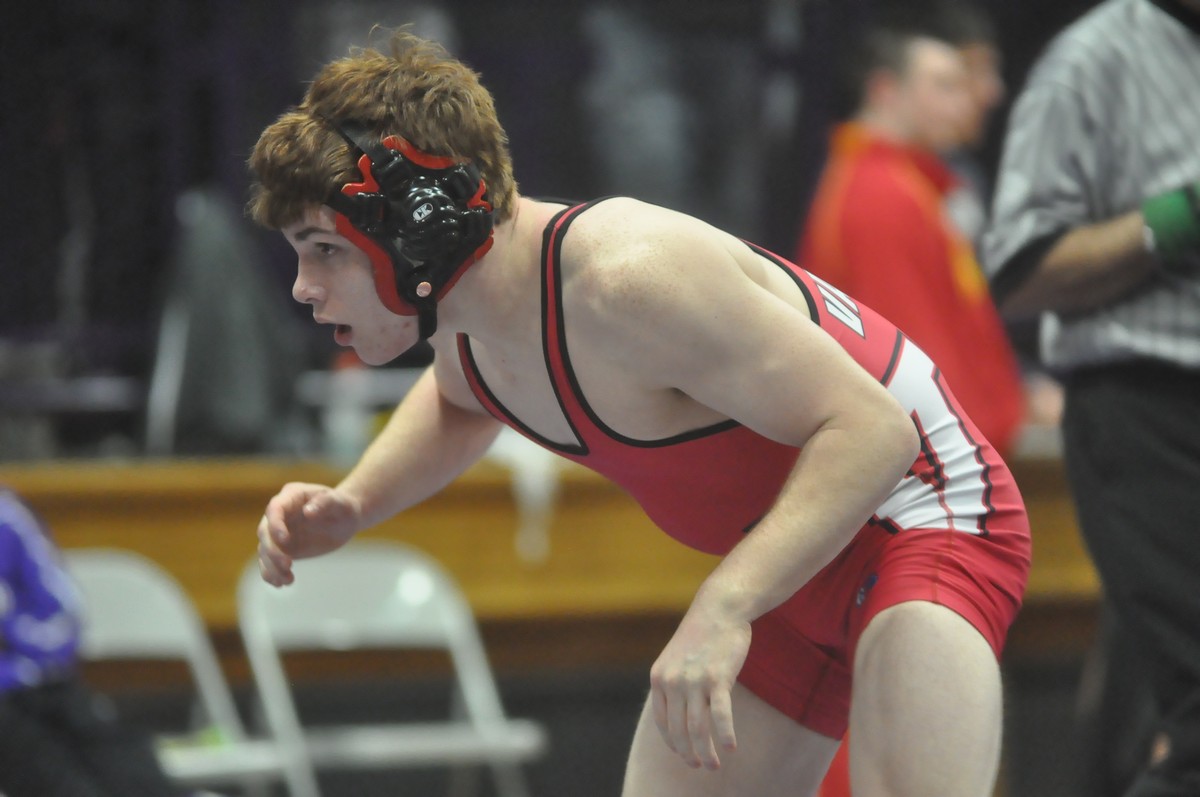 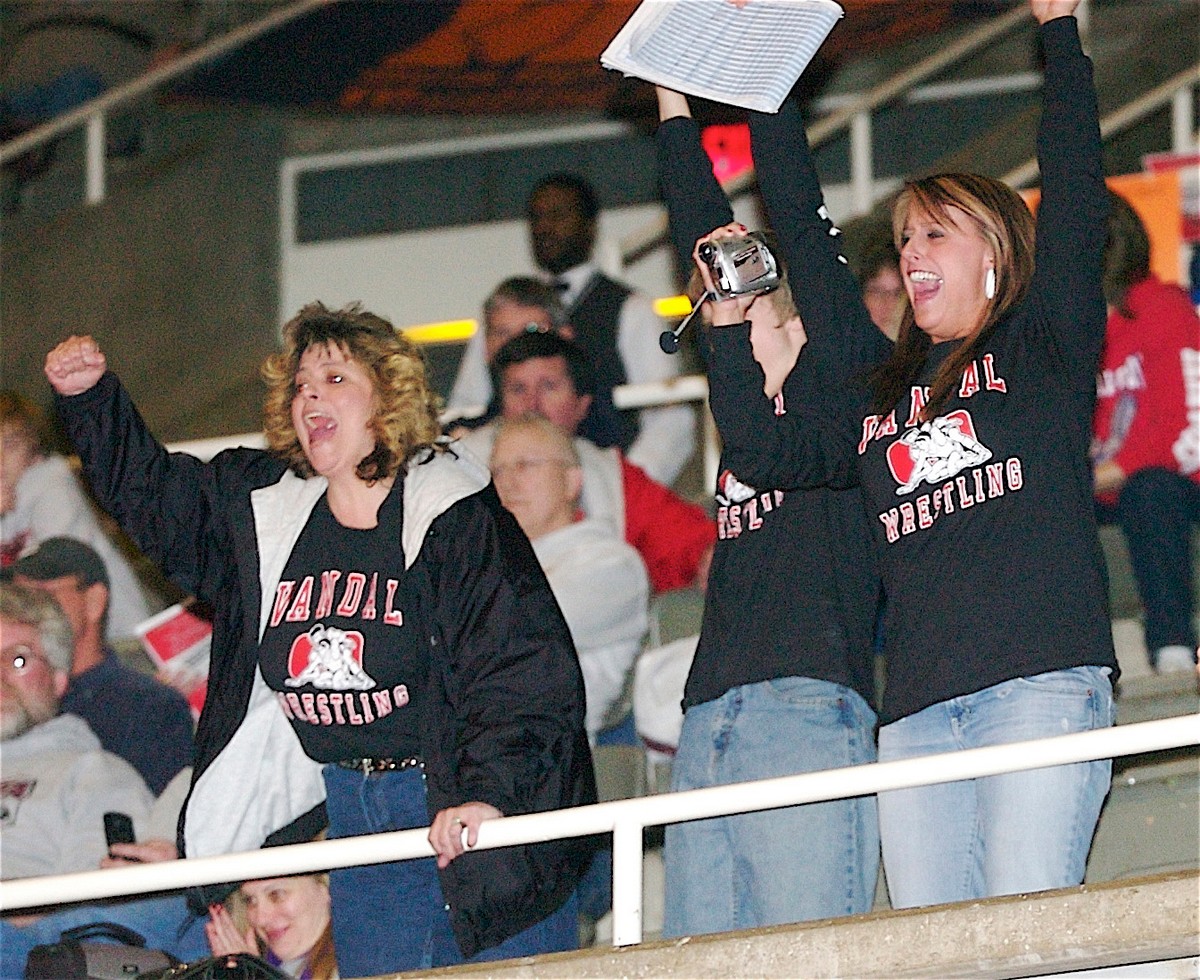 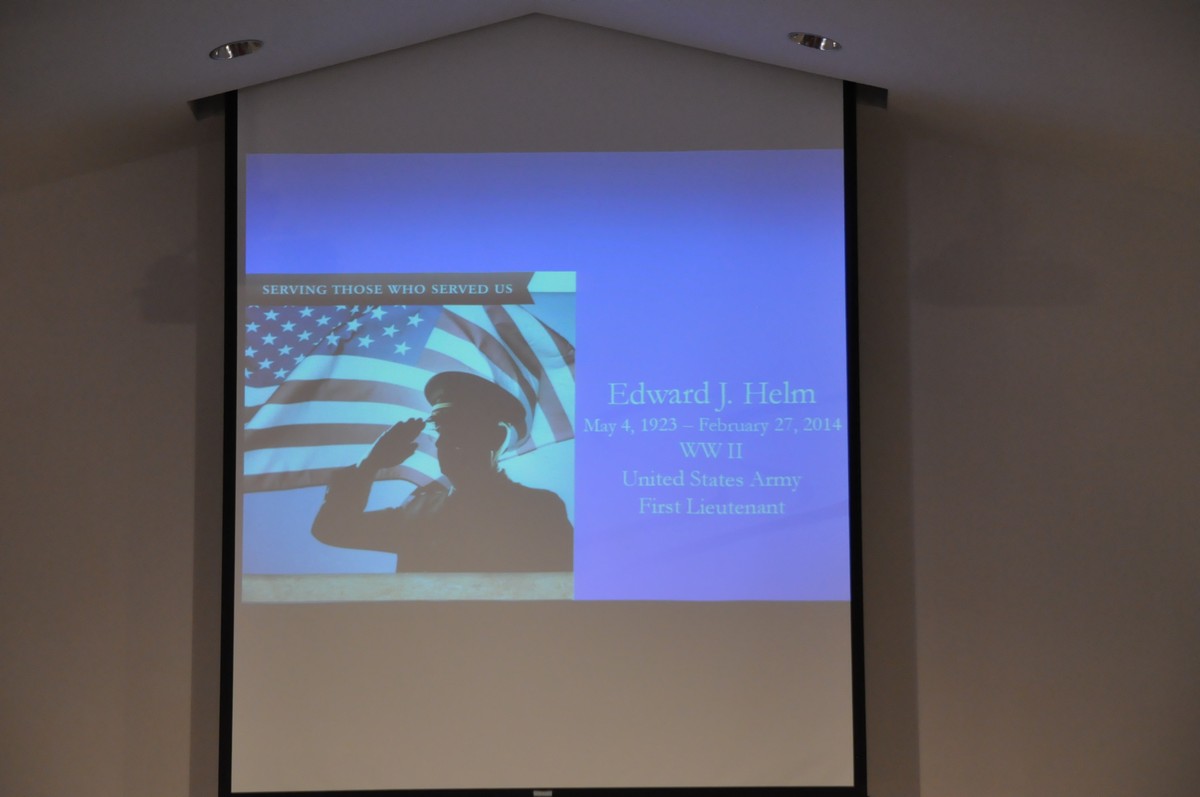 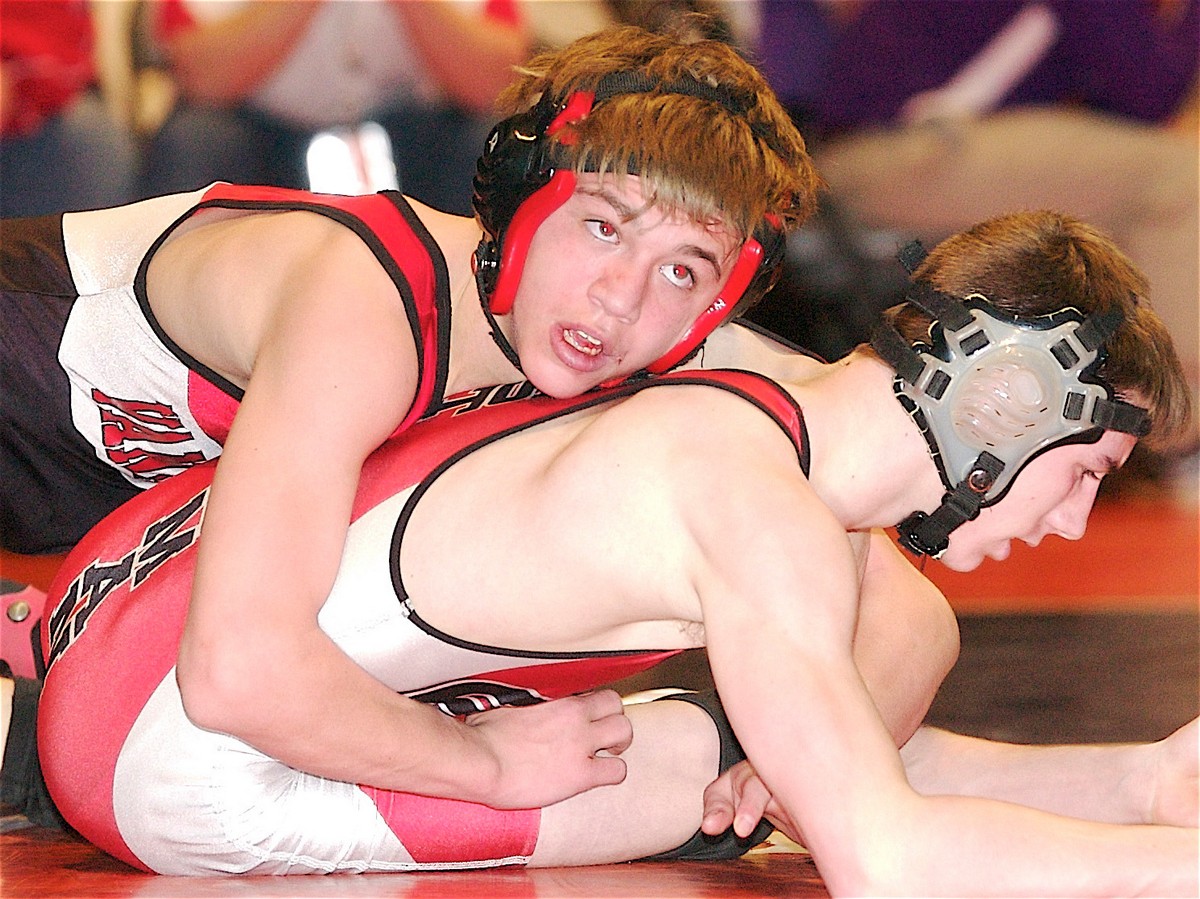 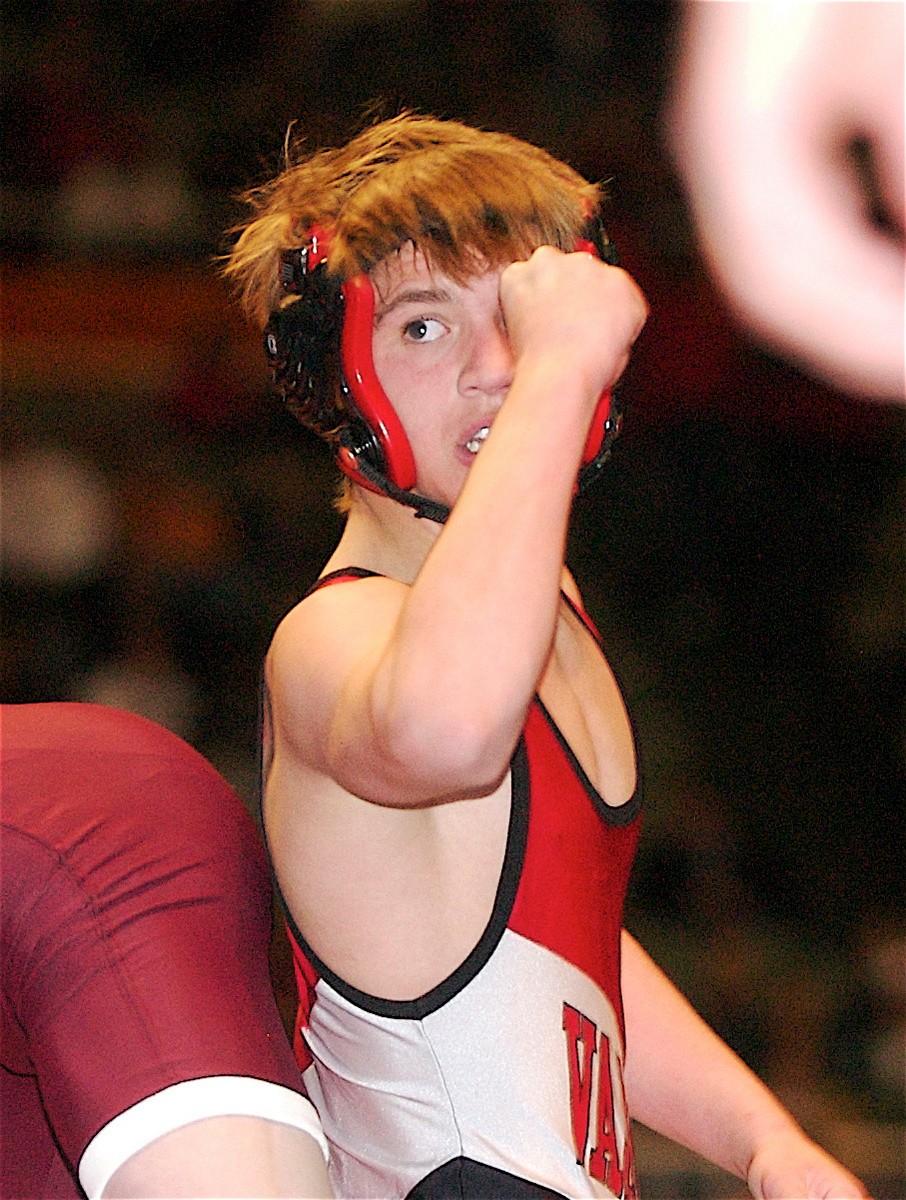 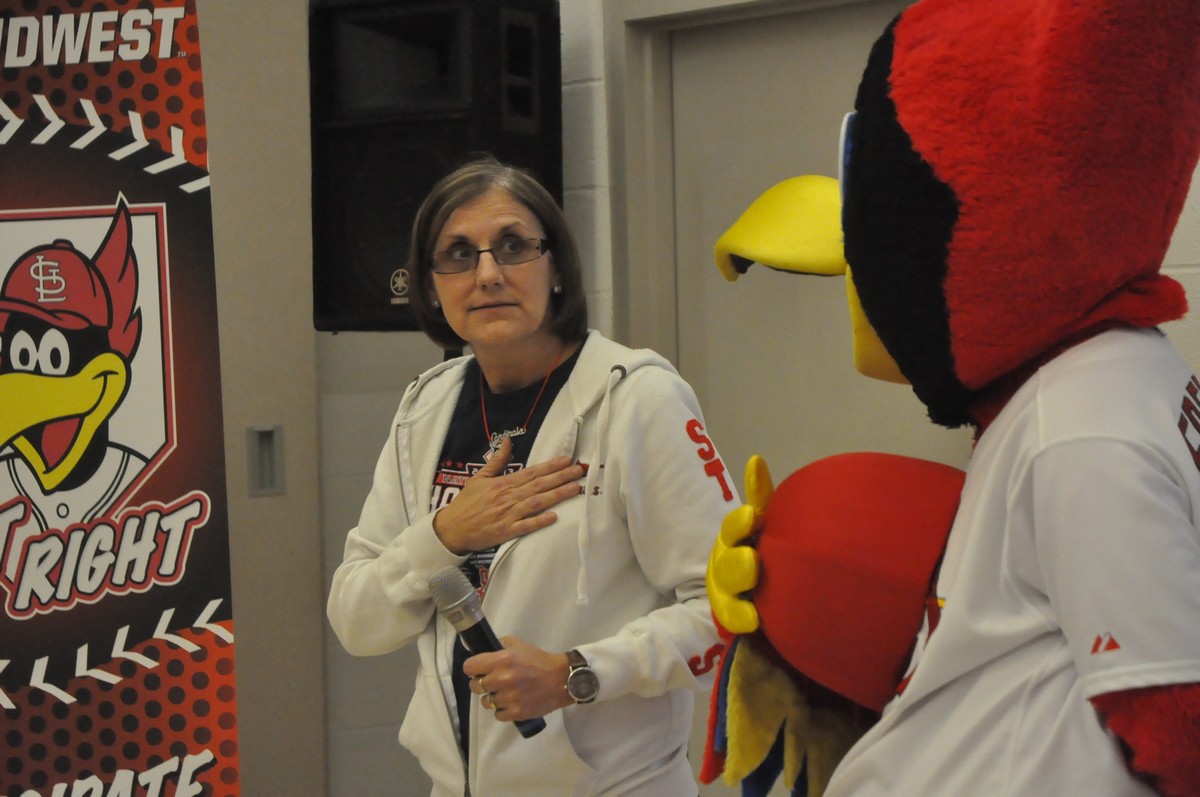 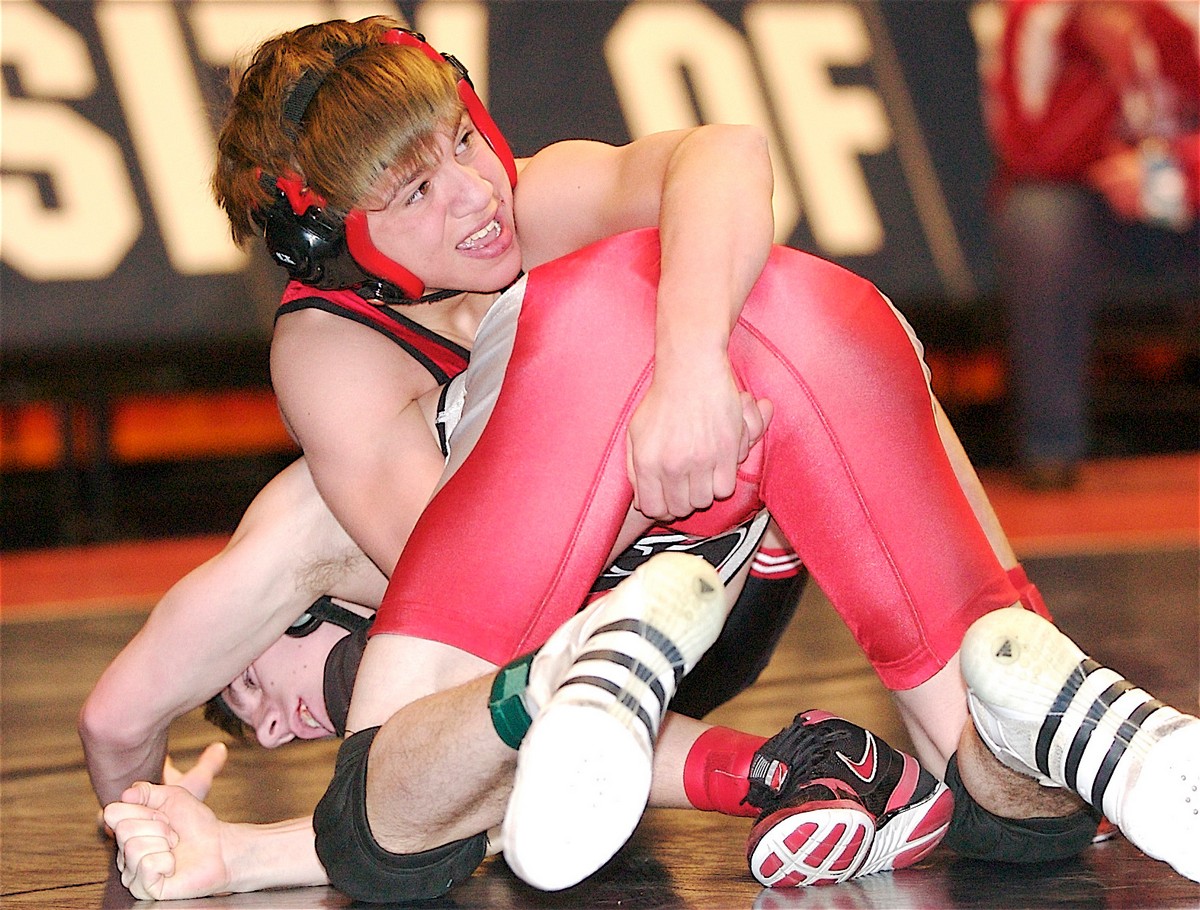