January 16 was a date the Vandalia boys basketball team had circled on the calendar for weeks.

Now, Feb. 6 is a day that cannot come soon enough.

That’s the date the IHSA will release postseason pairings. And you can rest assured, the Vandals are practically salavating at the possibility that another shot at archrival Greenville could await them when the Pana Regional pairings are revealed in a couple weeks.

"We’ve got some business to take care of, but hopefully we’ll get another shot at them," said Vandals coach Kevin Jackson moments after his team’s comeback from an eight-point deficit with two minutes to go came up just short in a 51-49 loss to the Comets Friday at VCHS.

"I’ve got to think they’re not going to want to see us again," Jackson added.

The reasons for Jackson’s hunch are plentiful, despite the fact that the Comets completed a regular-season sweep of the Vandals (8-10, 2-2), all but elminating them from South Central Conference East Division title contention in the process.

After nearly pulling off an upset at Greenville last month, falling by six points after a late Comets rally, the Vandals came even closer to pulling out a victory in the bitter rivals’ latest meeting, as they had a chance to force overtime with a two-pointer in the final seconds – or win it with a 3-pointer.

But after a timeout to set up a final shot, Marty Johnson was blanketed by three Comets near the 3-point line as the closing seconds wound down.

The sophomore managed to create some space with a pump fake, but his one-handed desperation attempt from two-point range failed to draw iron as time expired.

"I’m kicking myself just a little bit," Jackson said. "The last play that we tried to run is not something that we normally run. It’s something I tried to draw up, and I don’t like to do that, but we’d pretty much run through everything.

"I don’t know, maybe I out-thought myself."

The fact that the Vandals even had a chance to win or tie the game in the closing seconds is remarkable, considering a Kyle Dannaman 3-pointer had Greenville up 48-40 with 2:03 to go.

Dannaman’s shot capped an 8-0 Comets run and appeared to be a fatal blow to a Vandals’ team that refused to die after a rough third quarter swung the momentum to the visiting team’s favor.

But shaky Greenville free-throw shooting and some clutch shots by Drew Bell and Marty Johnson recuscitated the Vandals’ hopes in the final two minutes.

Bell kick-started Vandalia’s late charge, scoring six points all by himself over the next minute of play, starting with a baseline drive to the bucket with 1:50 to go.

Bell then drew Vandalia to within four points of Greenville, 48-44, by coming up with a steal and hitting a pair of free throws after being fouled in transition.

The senior then made it a three-point game with just under a minute to go by rattling in a jumper after Greenville made just 1 of 3 free throws on its previous possession.

Dannaman hit just 1 of 2 from the line on Greenville’s next trip down, and Johnson cut the Comets’ lead to just one with a 3-pointer with 40 seconds to go, sending a big crowd into hysterics..

Greenville converted just 1 of 2 charity attempts again on its next possession – finishing just 3 of 7 from the charity stripe in the final two minutes.

But it proved to be enough, as the Vandals couldn’t get a clean look at the hoop in their final possession.

"They didn’t break our back – we kept fighting," Jackson said. "But it was just one of those deals where they made one more shot than we did tonight.

"It was a great effort by our guys. They executed the crap out of stuff and did a nice job. (Greenville) just hit a couple big shots in the third quarter and a couple more in the fourth quarter."

The third quarter was, indeed, a killer for the Vandals, who saw a 26-21 lead turn into a 38-33 deficit thanks to a 17-7 Greenville advantage in the frame.

Ryan Mulholland got the Comets off on the right foot with a 3-pointer out of the gates. Bell countered with a bucket, but Greenville started hitting the boards with a vengeance, drawing even with the Vandals with back-to-back stickbacks.

On the latter possession, the Comets had three offensive rebounds.

"That’s a bad ole’ sign," said Jackson, whose team had out-rebounded Greenville 14-9 in the first half. "We battled through that and got to rebounding the ball a little bit at the end, but you don’t like to see that out of the gate."

The Vandals were able to overcome Greenville’s improved rebounding, finishing with a slight 27-23 advantage on the glass for the game, but they couldn’t overcome a huge second half by Derek Atchison.

The 6-foot-3 senior power forward finished with nine of his 12 rebounds and 12 of his 16 points in the final 16 minutes, including a fadeaway baseline jumper with 4:40 to go in the third that gave Greenville its first lead since the 3:32 mark of the first quarter.

It turned out to be a lead they wouldn’t relinquish.

Atchison’s much smaller counterpart, VCHS senior Austin Wollerman, enjoyed similar success in the first half, as his 12 points helped Vandalia take a five-point lead into the locker room.

"That’s a tough matchup for Austin," Jackson said. "But, like Austin does every night, he fought."

Bell’s knack for closing out quarter with buzzer-beating buckets also proved to be a difference maker for the Vandals in the opening 16 minutes.

Bell gave Vandalia a 15-10 lead at the end of the first quarter after Atchison lost control of a defensive rebound and the ball was deflected directly to Bell, who went in for a layup.

Dylan Durr then found Bell for a 3-pointer just before the halftime buzzer that gave the Vandals huge momentum going into the locker room. Greenville had a chance to tie or take the lead by holding for the last shot with 38 seconds to go, but Durr came away with a loose ball after an ill-advised Comets shot with 17 seconds to go, and the Vandals capitalized.

Greenville bounced back strong in the third quarter, however, holding Vandalia to 3 of 8 shooting while enjoying a 10-2 advantage on the boards.

The fourth quarter looked like it was going to belong to Greenville as well after a long Dannaman 3-pointer with five minutes remaining broke up a 40-40 tie and kicked off an 8-0 Greenville run.

But the Vandals showed tremendous resilience down the stretch – just one trait that has endeared them to their coach.

"I love our kids," Jackson said. "Man, they give us everything they’ve got every night. They execute our stuff about as well as anybody can.

"I’m really proud of them. It was just one of those games that we came up a little on the short end of the stick."

Bell finished with a game-highs of 17 points and six assists for the Vandals, while Wollerman had a team-best eight rebounds and 12 points. Johnson chipped in 10 points and five rebounds.

The JV Vandals (3-6) avenged an earlier loss to Greenville with an impressive 56-40 win over the Comets. 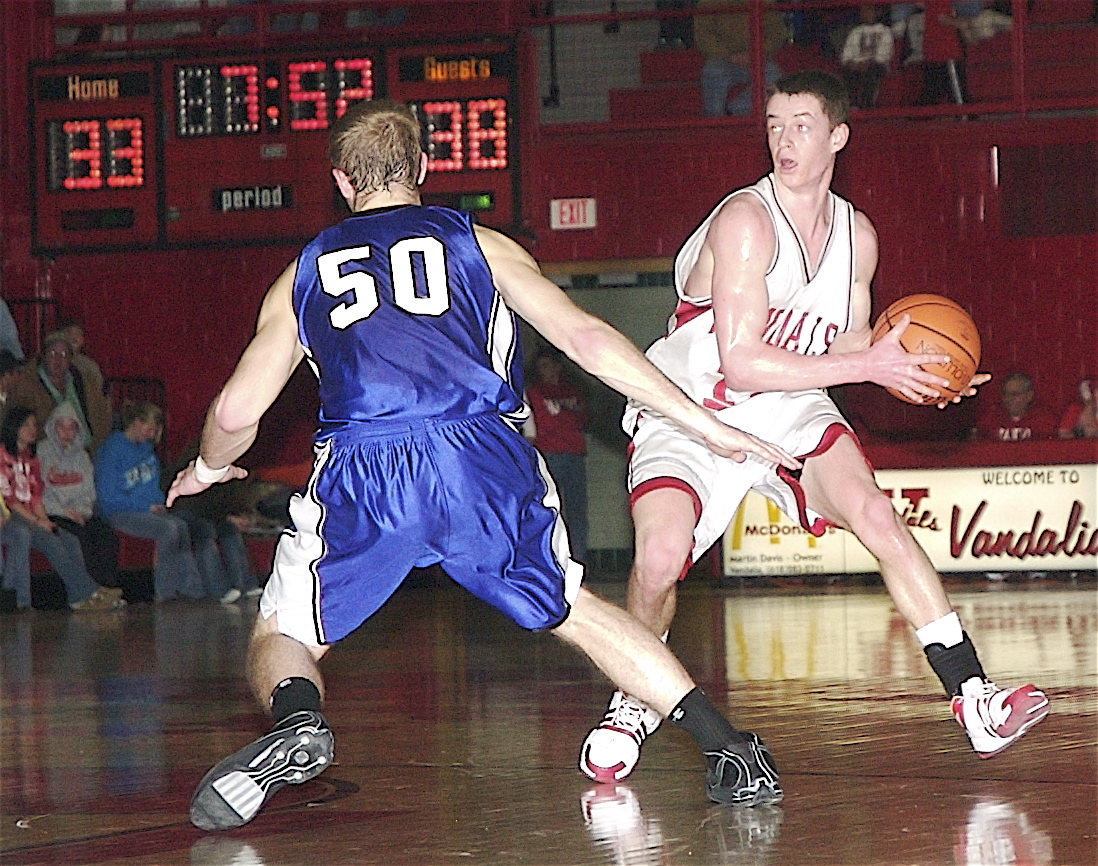 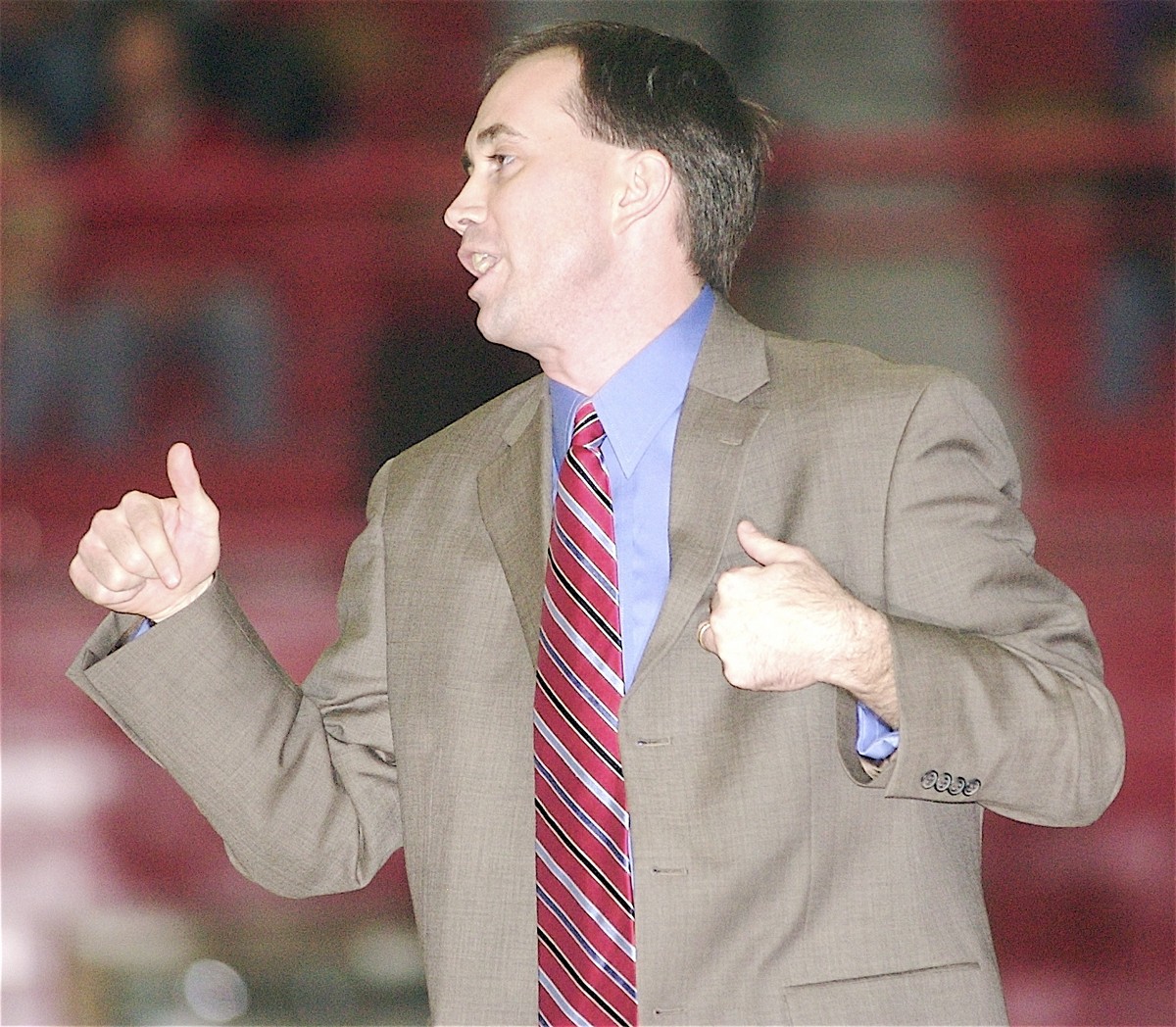 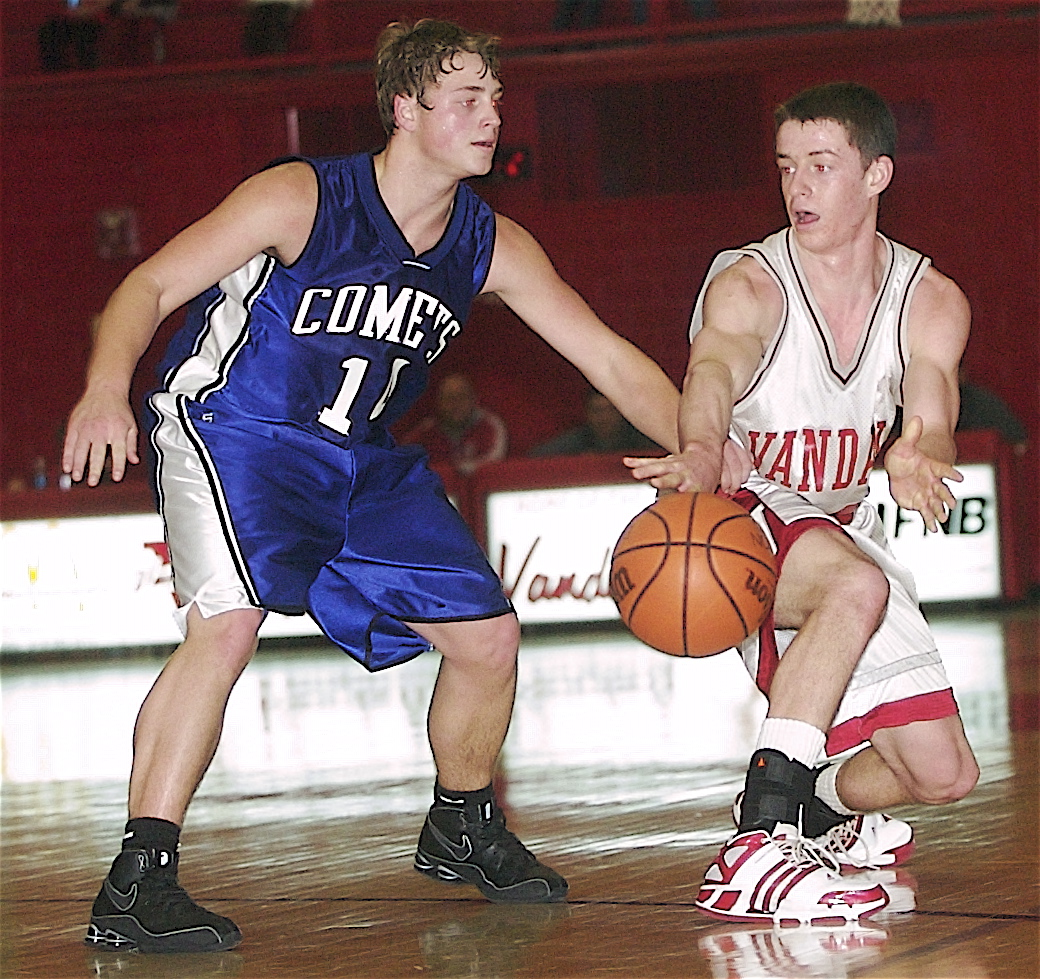 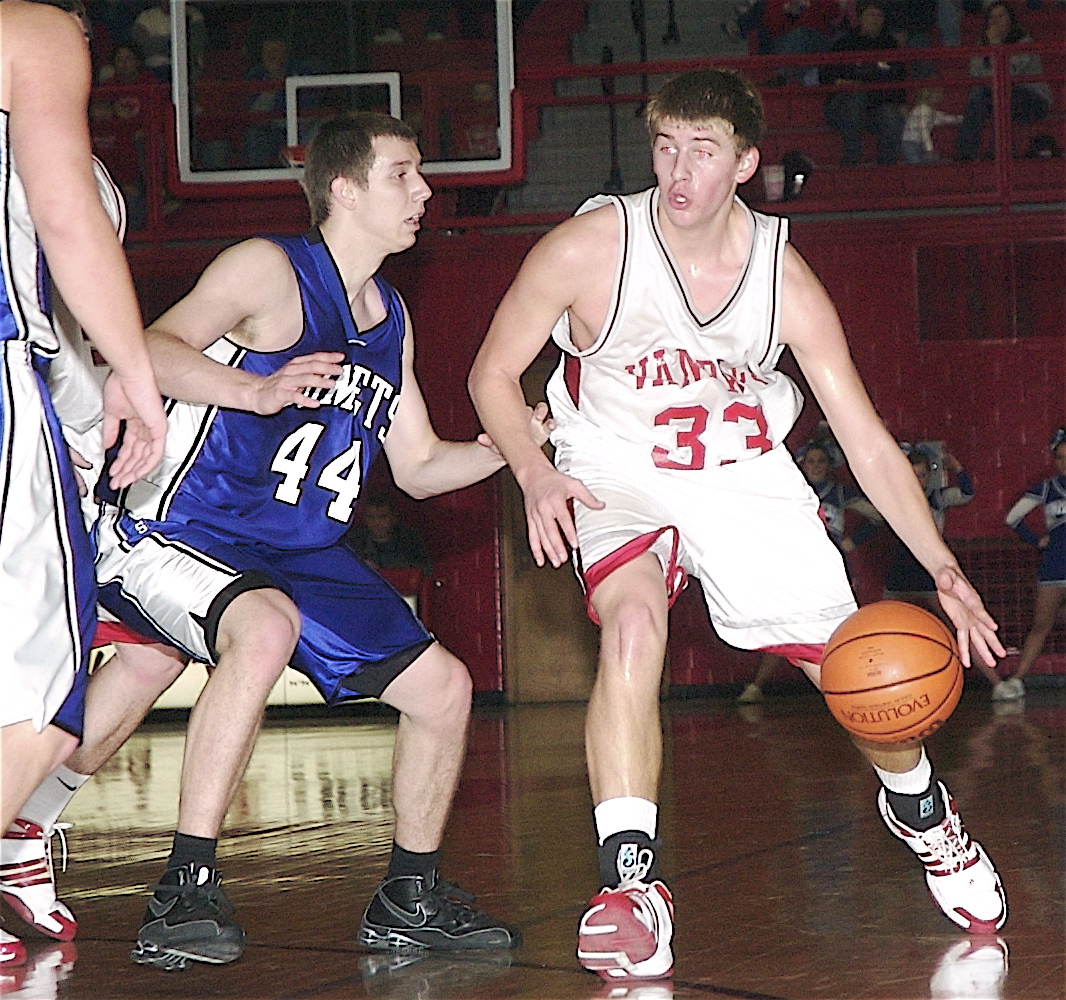 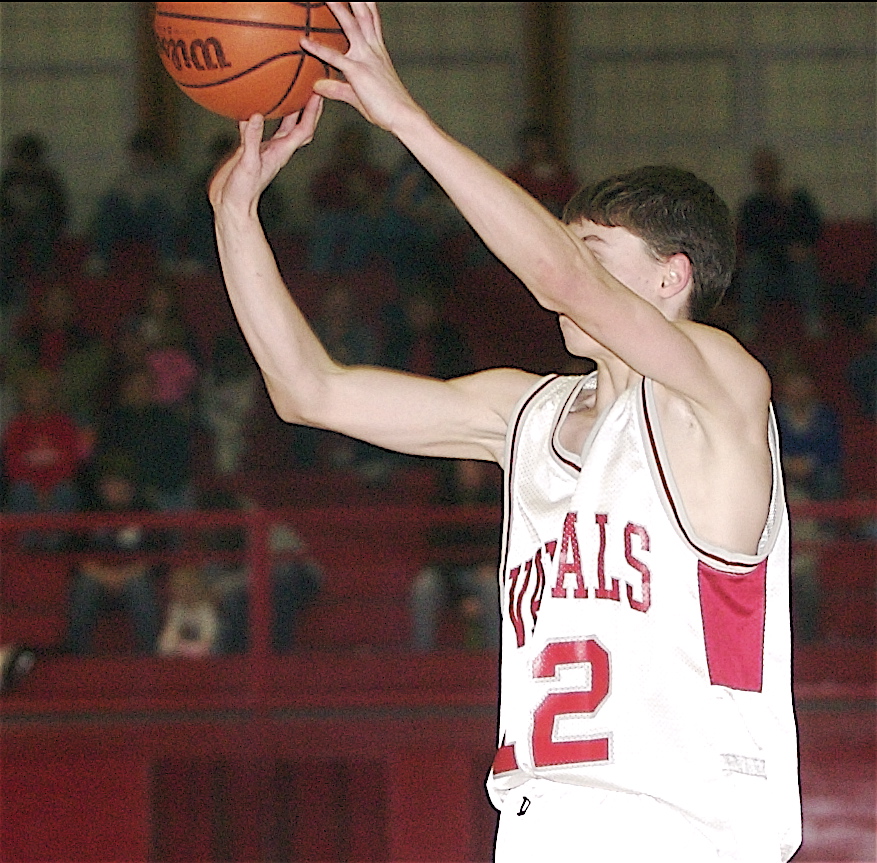 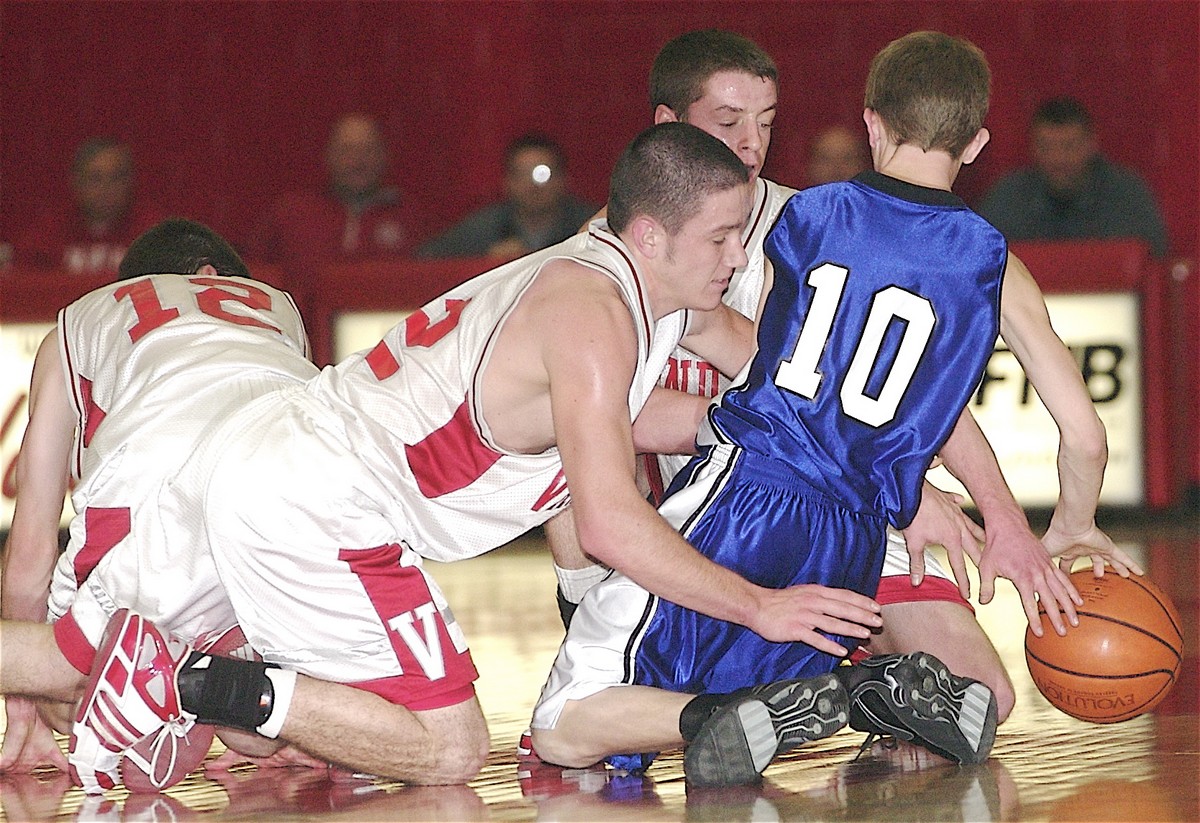 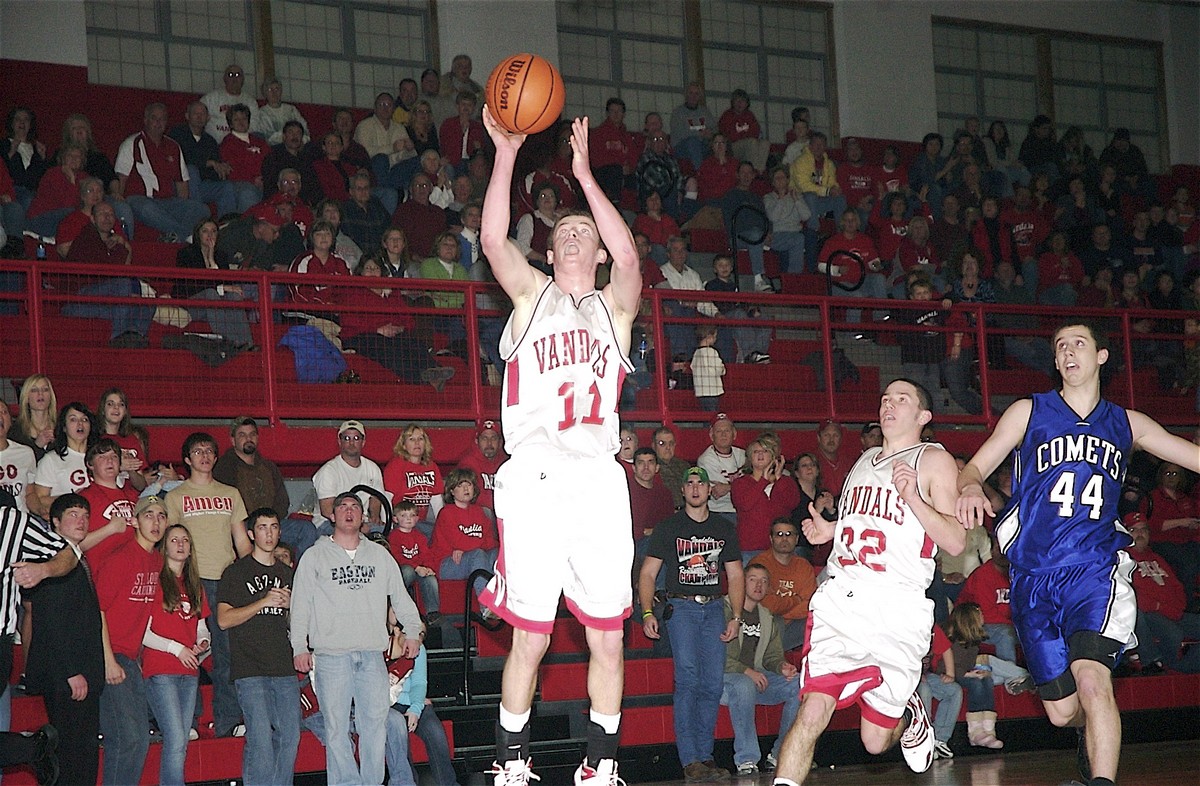