Playing in an oil refinery town that prides itself on its blue-collar image, the visiting Vandals were the team that put forth a hard-hat, lunch pail effort Friday in a 54-40 victory at East Alton-Wood River.

Case in point: squaring off against a team featuring a pair of huge post players, Lucas Cobb (6-foot-4) and Colby Hall (6-5), the VCHS boys basketball team outrebounded the Oilers by a 2-to-1 margin, 30-15.

That was just one of the “hustle” statistics in which the Vandals dominated in their second straight double-digit victory.

“We’ve got a lot of kids with a lot of heart and a lot of character,” Vandals coach Kevin Jackson said. “They’re playing hard and they’re having fun playing hard together; that’s what coaches like to see.”

Setting the tone in effort department was 5-foot-10 senior Austin Wollerman, who pulled down a game-high 14 rebounds, to go along with 13 points.

Amazingly – considering he was going up against the towering Hall – 11 of Wollerman’s boards were of the offensive variety. The Vandals were able to convert Wollerman’s offensive rebounds into 11 second-chance points.

“He’s all hustle,” said Jackson of a player who’s averaging more than twice as many points (10.8) and rebounds (7.8) per game than he did a year ago. “He has worked tremendously hard to get himself better, and he plays so darn hard.”

Several other Vandals hit the offensive glass as well, as VCHS had more offensive rebounds (18) than the Oilers (2-4) had total rebounds.

If not for those efforts – and the 17 second-chance points they allowed VCHS to score – the outcome could have been different.

Stifling defense and the return of Marty Johnson also helped the Vandals inch toward the .500 mark after an 0-3 start.

The Oilers shot 49 percent from the field, but 20 turnovers – a majority of which were forced by the Vandals – proved to be too much to overcome.

Drew Bell was a one-man wrecking crew on the defensive end, coming away with eight steals. The 6-foot-1 senior added 10 points, including a pair off a turnover to kick off a 7-2 Vandalia run to start the game.

“I was pleased with the way we came out,” Jackson said. “I thought our intensity was very good starting out.”

A spate of Vandals turnovers helped the Oilers bounce back to take a 15-11 lead early in the second quarter, but Vandalia closed out the final five minutes of the half on a 16-5 run that permanently swung the momentum in its favor.

Will Cowger gave the Vandals the lead for good, 22-20, with a basket at the 1:30 mark of the second quarter.

The Vandals then stretched out a six-point halftime lead in the final seconds of the half, as Wollerman scored in transition off a Bell steal and Johnson hit a 3-pointer at the buzzer.

Johnson, who sat out the Vandals’ prior two games with a lingering ankle injury, finished with nine points on three 3-pointers. The sophomore also dished out at least six assists, and was a clear difference-maker for VCHS.

“He provides us with another offensive threat,” Jackson said. “He’s just that much more to our starting lineup, which allows Angel (Osorio) to come off the bench and be extremely aggressive.”

The Vandals picked up right where they left off at the start of the second half, quickly extending to a double-digit lead with a 9-2 run.

The Oilers never recovered, thanks in large part to the Vandals’ ability to shut down Cobb inside.

“We came back in the second half and didn’t give Cobb much,” Jackson said. “I thought we had really good backside help with our defense.

“We worked on that all week; we knew they had big boys. We knew we had to do a good job there, and we did.”

The Vandals also beat the Oilers down the floor several times for easy transition buckets.

“I thought we ran the floor well,” Jackson said. “I liked our effort.”

Cowger led a balanced scoring attack with 16 points, one of three Vandals in double figures.

“I like our balance,” said Jackson after glancing down at the stat sheet “…That’s hard to guard.”

In addition to holding an opponent to fewer than 50 points for the third time in five games, the Vandals took good care of the ball for a second straight game, finishing with 14 turnovers.

All told, the Vandals are giving every indication they’ve turned the corner.

“I’m thrilled with the direction we’re heading,” Jackson said. “ We are definitely heading in the right direction.” 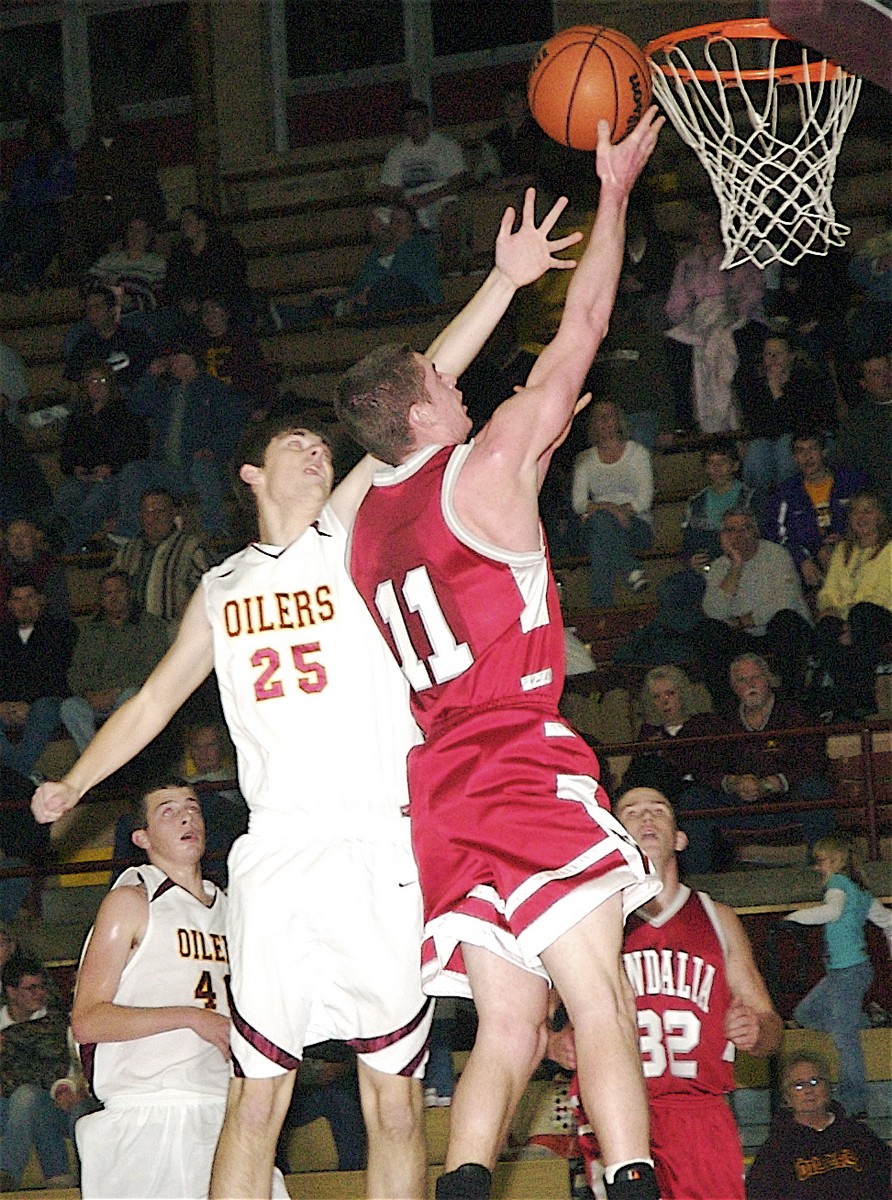 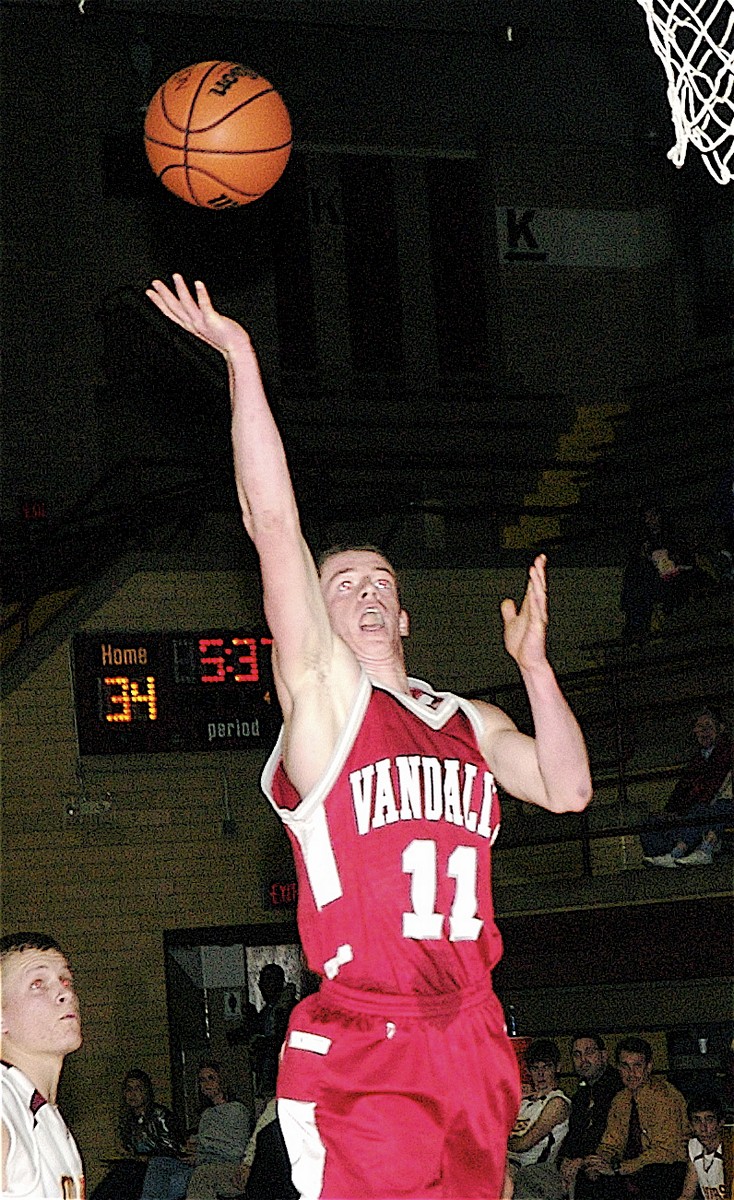 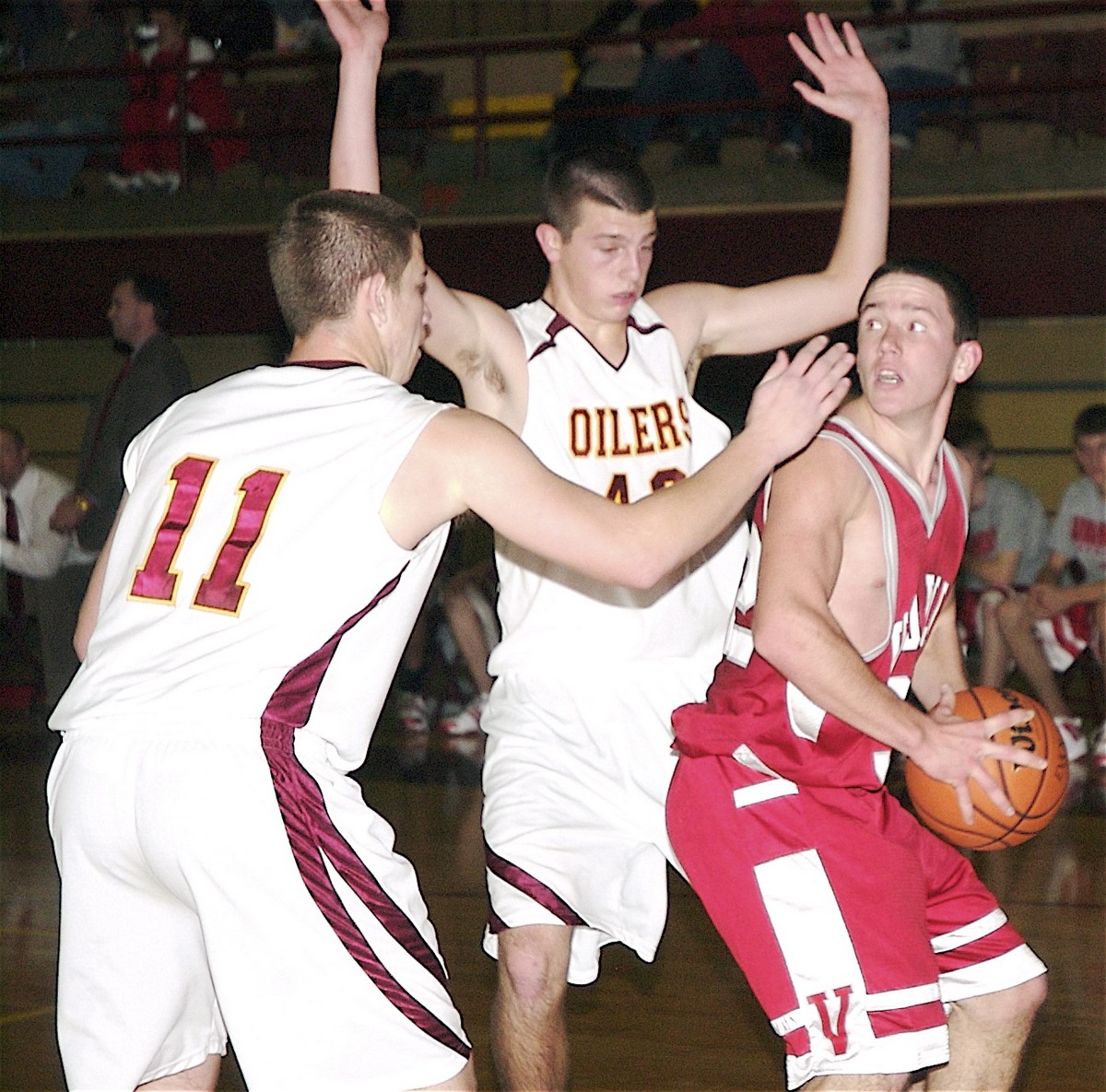 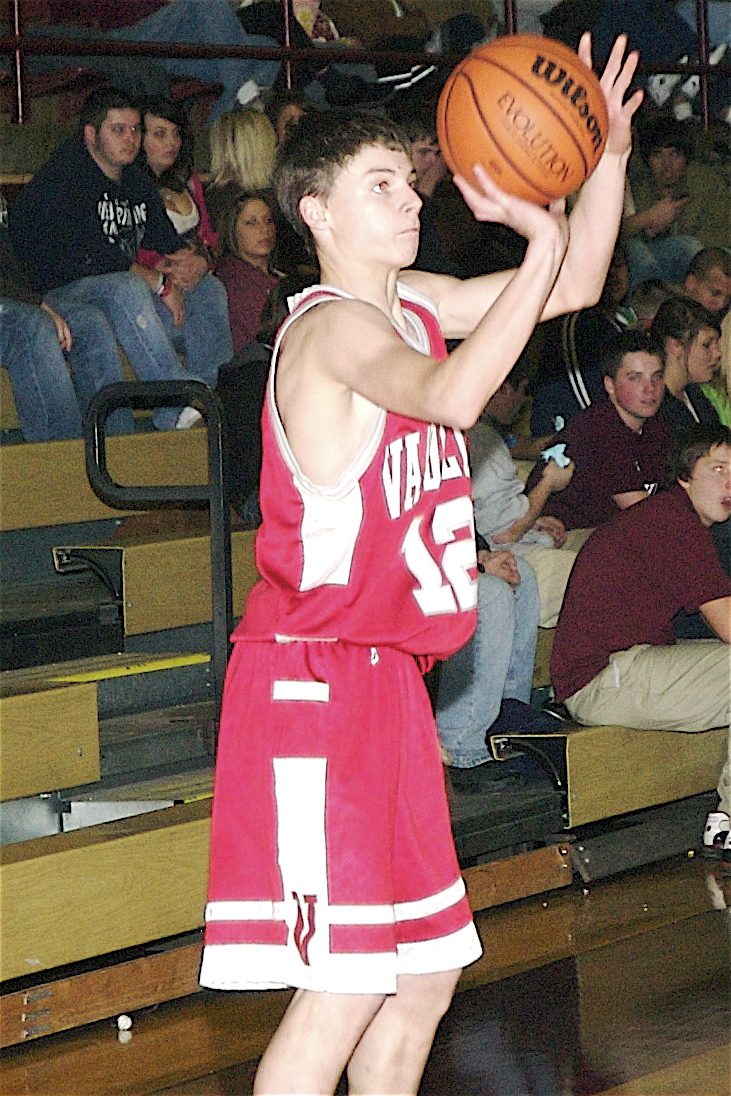 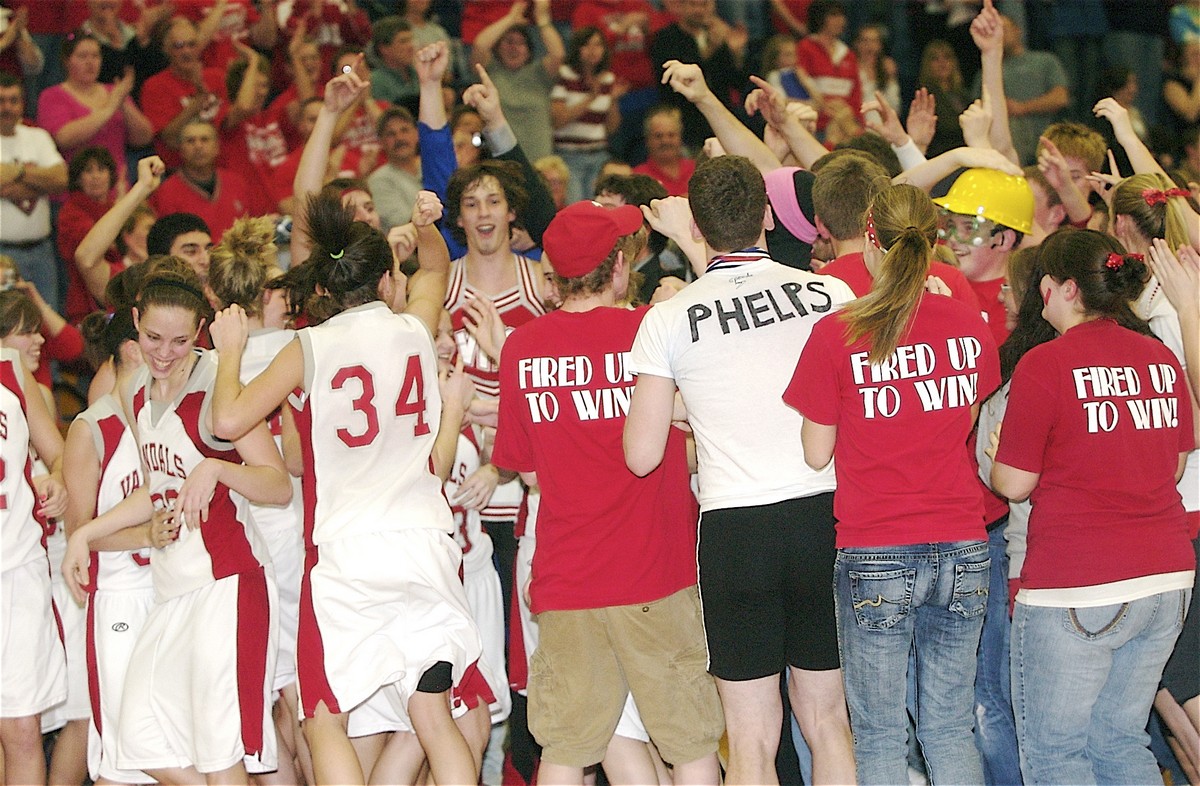 Will Cowger goes up for two of his 16 points Friday at East Alton-Wood River. 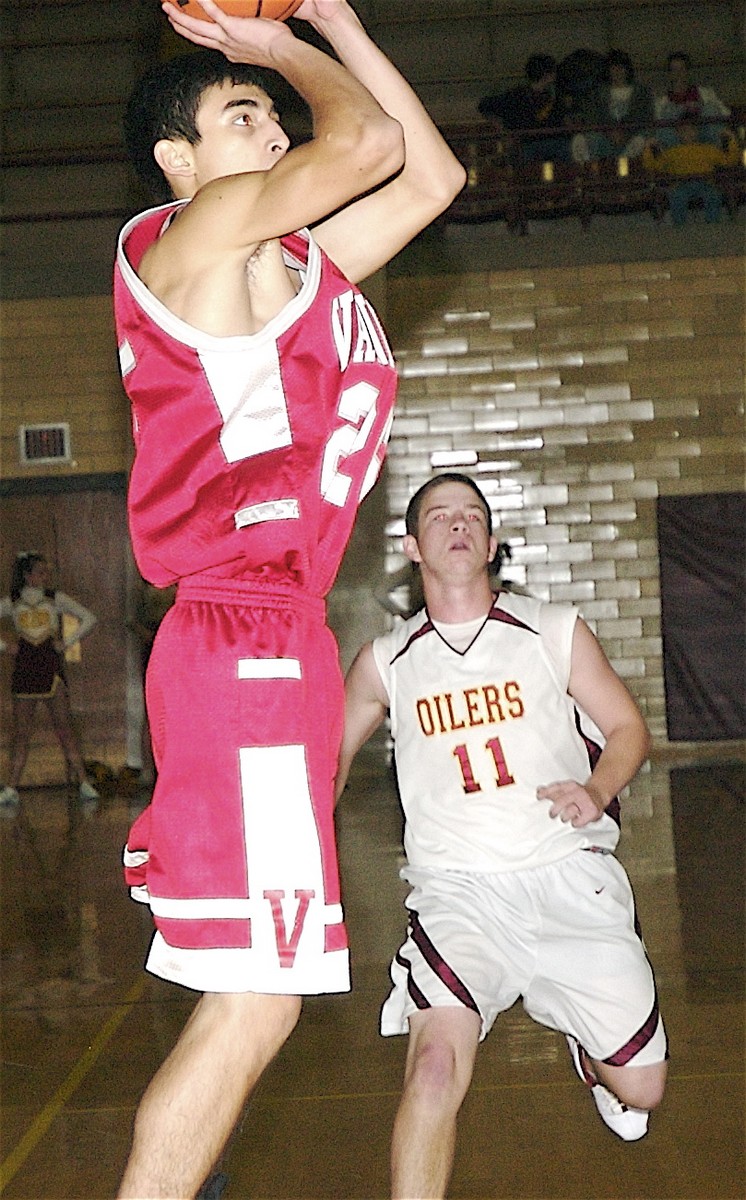