Newcomers put the Vandalia wrestling team in a position to claim victory in VCHS’s season-opener Tuesday, as three Vandals recorded pins in their first-ever varsity matches.

A familiar face then sealed the deal in style.

Junior Alex Foster – the Vandals’ lone returning state qualifier from last year’s Elite Eight team – closed out a 40-29 Vandalia victory over Belleville West at VCHS by recording a pin with 34 seconds to go in the final match of the night.

The Vandals held a 34-29 lead entering Foster’s 145-pound match, meaning that Belleville West could steal away a victory with a pin.

Fortunately for the Vandals, coach Jason Clay had his go-to wrestler to turn to in a crucial match.

“If I could pick anybody, he’s the kid I’d want out there,” Clay said. “And (Belleville West) drew 152 (to start the dual) and I thought that’s kind of ironic, that it could all come down to him, and he’d be my pick.

“He’s been there before, and I have a lot of faith in him that he can get it done if we need a win.”

Still, considering the Vandals needed only to avoid a pin to claim victory, Clay advised Foster to be cautious and wrestle defensively. The advice backfired, however, as Foster was taken down early and trailed 2-0 for a majority of a tense final match.

“It was kind of stupid on my part,” Clay said. “I said, ‘Don’t do nothing silly, just wrestle solid.’ And he came out kind of cautious, and that’s my fault, he got taken down.”

Foster returned to his aggressive form in the third period, however, showing how he managed to qualify for state as a sophomore.

After surviving a few tense moments in the middle of the match, Foster scored an escape with half a minute remaining in the final period. With a team victory all but secured after avoiding a pin, Foster then went on the offensive, pouncing on his opponent to record the Vandals’ fifth pin of the night.

“That’s the way he’s always wrestled,” Clay said. “He’s got a lot of heart and a lot of guts.”

Clay expected Foster’s heroics, but he wasn’t quite so sure what to expect from freshmen Trever Pyle and Levi Ulmer in their debuts, or varsity newcomer Justin Hill.

But they all delivered big time.

Ulmer gave the Vandals an early 10-6 lead by pinning his opponent just 2 ½ minutes into his 171-pound match.

Moments later, Pyle gave the Vandals the lead for good, 19-16, by recording a pin at the 2:45 mark in the first quarter of his first varsity match

“I wasn’t sure what was going to go down (with the freshman),” Clay said. “But they both got pins and looked good. That’s a good sign.”

Hill extended Vandalia’s lead to 25-16 with a pin early on in the second period of the 112-pound match.

Then, following a loss in the 119-pound match that trimmed Vandalia’s lead to five points, 25-20, John Vosholler gutted out a 12-7 decision in the 125-pound match.

Vosholler’s roller-coaster match had to be stopped twice after he suffered a cut above his right eye, but he prevailed, nonetheless, giving Vandalia a 28-20 lead.

Anthony Coney then gave Vandalia a commanding 34-20 lead with just three matches to go, recording a pin  two minutes into his 130-pound match. Coney was making his first varsity start at Vandalia, but Clay was confident in the senior, who got varsity experience last year while attending school in Springfield.

“I wasn’t too worried about Anthony, and he came out there and got the pin,” Clay said. “That was a big win for us at the time. It kind of put us out there by a good margin.”

Fortunately, Foster, one of the Vandals’ more experienced wrestlers, came through on a night in which VCHS’s other returning starters had some troubles.

“I think we had three or four of our sectional qualifiers lose, and we still came out with a win,” Clay said. “Some of the guys I thought would win for sure got beat, and that happens. That’s why it’s a team. Some of the other guys stepped up and picked up the slack.”

Two of the Vandals’ returning sectional qualifiers did emerge victorious, however, as Jake Etcheson took a 14-3 major decision in the 160-pound match and Caleb Walton cruised to a 13-6 win in the 189-pound match.

Overall, Clay’s new-look team showed their coach they have what it takes to keep Vandalia’s tradition going.

“I told the kids, we’re going to get a lot better as we go on here,” Clay said. “There’s a lot of things we need to work on, a lot of first-match mistakes. But I think the heart’s there, and they know they’re going to get better and better as the year goes on." 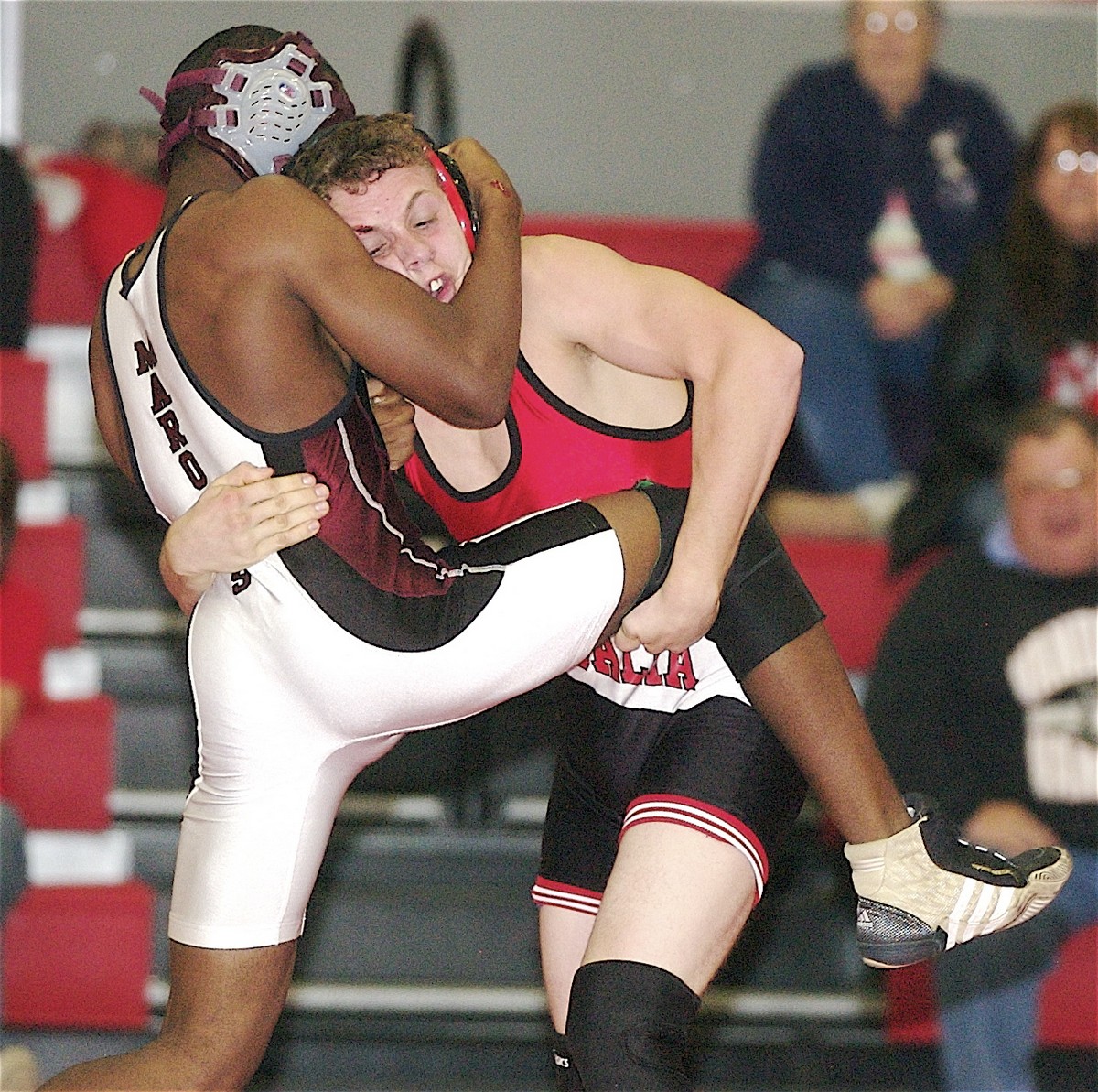 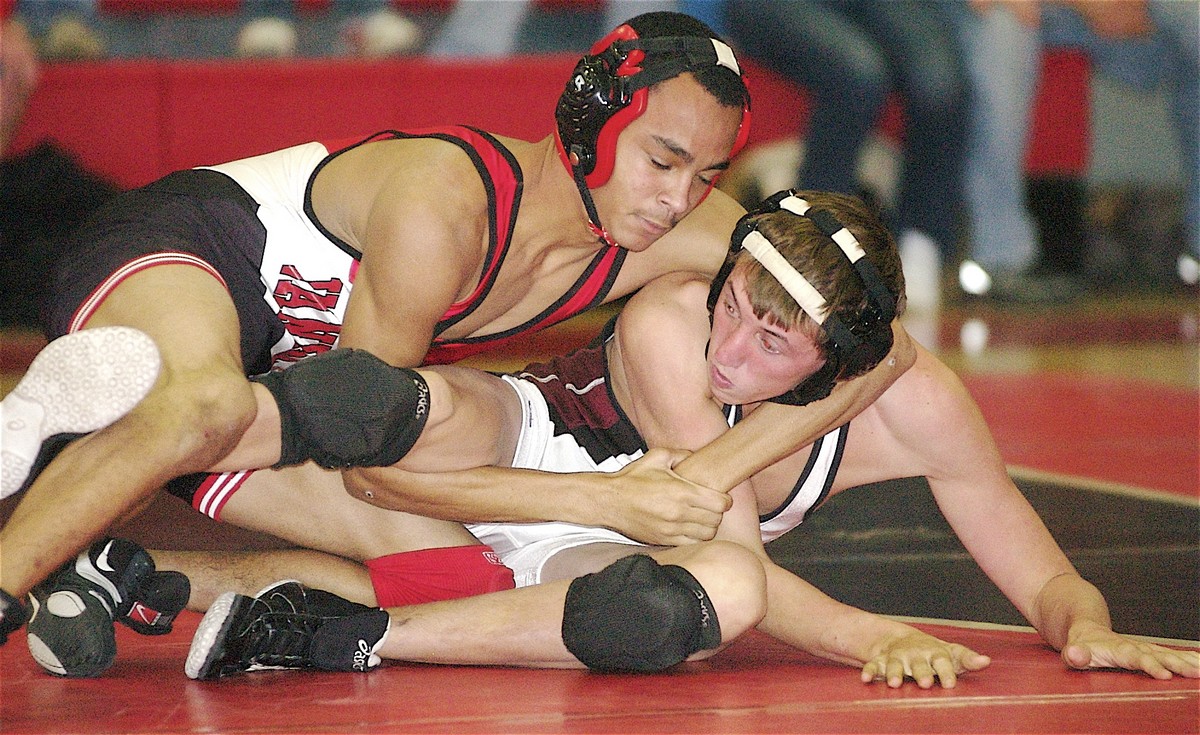 Vandalia senior Anthony Coney subdues an opponent moments before recording a pin in the 130-pound match Tuesday at VCHS. 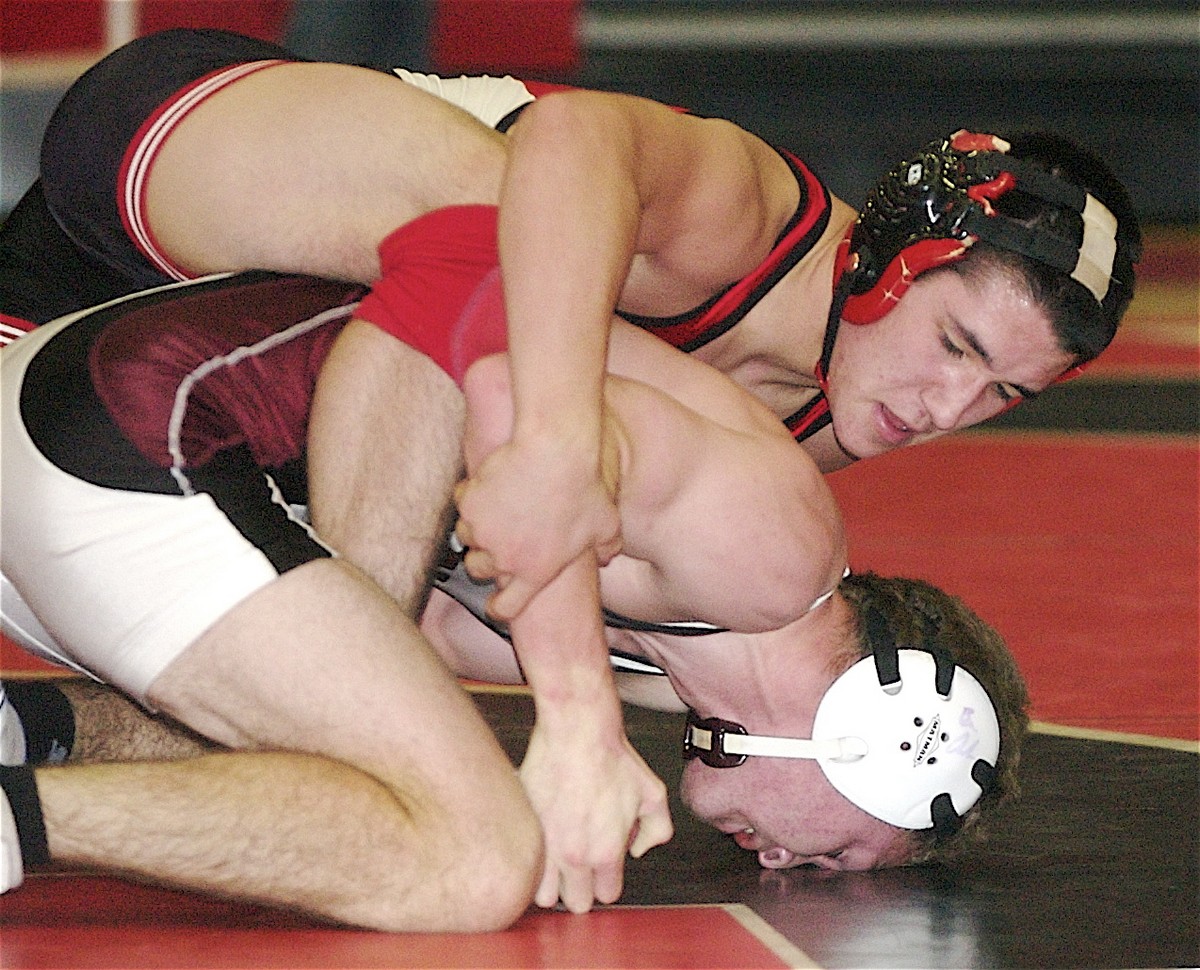 Vandalia junior Alex Foster smashes his opponent’s nose into the mat Tuesday during their 145-pound match at VCHS. Foster trailed 2-0 for much of the match, but battled back to record a pin with half a minute remaining, clinching the Vandals’ season-openi