For the first time in program history, the Vandalia girls basketball team has earned a state ranking.

The Lady Vandals showed Alton-Marquette why on Monday, routing the overmatched Explorers, 63-29, to improve to 2-0 on the young season.

VCHS lived up to its No. 6 ranking in the latest Associated Press Class 2A poll, forcing Marquette into 23 first-half turnovers on its way to a 41-13 lead at intermission.

“All around, it was a good ballgame  – and an excellent first half,” Vandals coach Mike Butler said.

As has been the case so often the last two years, the Lady Vandals created offense with defense, as it scored 26 points off Marquette turnovers in the first 16 minutes alone.

“I think our defense played pretty darn close to as well as it can play,” Butler said. “That got us going, getting us some layups and transition stuff.”

And, on the rare occasion in which the Lady Vandals weren’t scoring in transition off Marquette turnovers, they ran their motion offense to near perfection.

Five different players entered the scoring column in the first two quarters, as VCHS shot a blistering 52 percent from the field (15 of 29).

“When we spread people out and run that motion, with the offensive weapons we have, it’s tough to guard, because you can’t key on one or two players,” Butler said.

The Lady Vandals cooled off considerably in the second half, scoring just 22 points, but Butler chalked up the drop-off to his team taking its intensity down a notch on defense.

“It’s tough to keep your momentum going in the second half when you’re (that far) ahead,” Butler said. “We kind of backed things off (defensively) and I think that affects us when we’re not as aggressive on defense.”

Amanda Walton led the defensive onslaught with five steals, to go along with her 16 points and at least three assists.

Cassie Warner showed off her all-around skills, scoring a game-high 17 points, in addition to coming away with nine rebounds and two steals.

Laura Hobbie added 12 points, connecting on all six of her free-throw attempts, while Shelby Cearlock had 10 points and three steals.

Ashley Durbin chipped in four rebounds, two steals and at least five assists in a victory that reaffirmed a state ranking Butler feels his team deserves.

“I think these kids have earned it,” said Butler, whose team has won 24 of its past 29 games, with its only losses coming to Marion, Pana (twice), Teutopolis and Breese Central. “I think maybe at the end of last year, they didn’t get some recognition they deserved. It’s time for them.

“It’s a real privilege and honor for these kids.”

But there is a downside to such recognition.

“You also have to realize it puts pressure on you as well, because teams are going to be out to play their best against you when you’re a ranked team,” Butler said. “You just have to be ready every night.”

Fortunately, Butler says the Lady Vandals have not let their newfound stature as a state-ranked team go to their heads.

“They’re a competitive bunch, and I don’t think a ranking means much to them,” Butler said. “They’re just going to come out and play hard and do the best they can every night.”

Alton Marquette can attest to that.

The Lady Vandals were also victorious in the junior varsity game, 38-28.

Megan Shreve led the team in scoring for a second straight night with 11 points, while Amy Walton had eight. Haley Wollerman chipped in six, while Audra Donaldson had five.

Hobbie led a balanced scoring attack with 17 points, 12 of which came during a second quarter in which Vandalia had a 21-6 advantage.

Abbey Jones led the Lady Cougars with 12 points in her first game of the year.

South Central prevailed in the junior varsity game, however, 31-27, as Ashley Pollard led the way with 11 points.

Shreve led the Lady Vandals with a game-high 12 points, while Megan Durbin had five and Wollerman and Donaldson had four apiece. 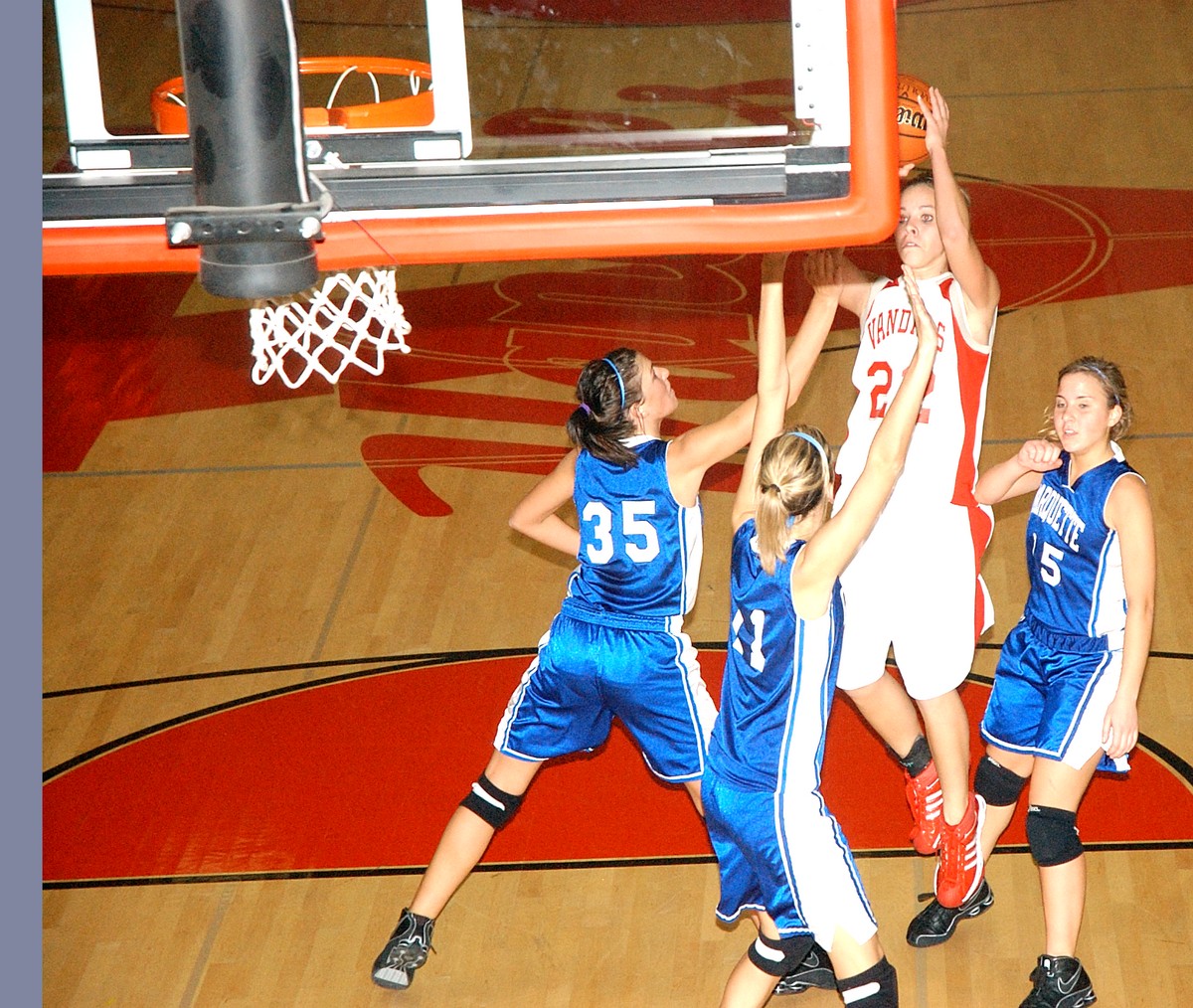 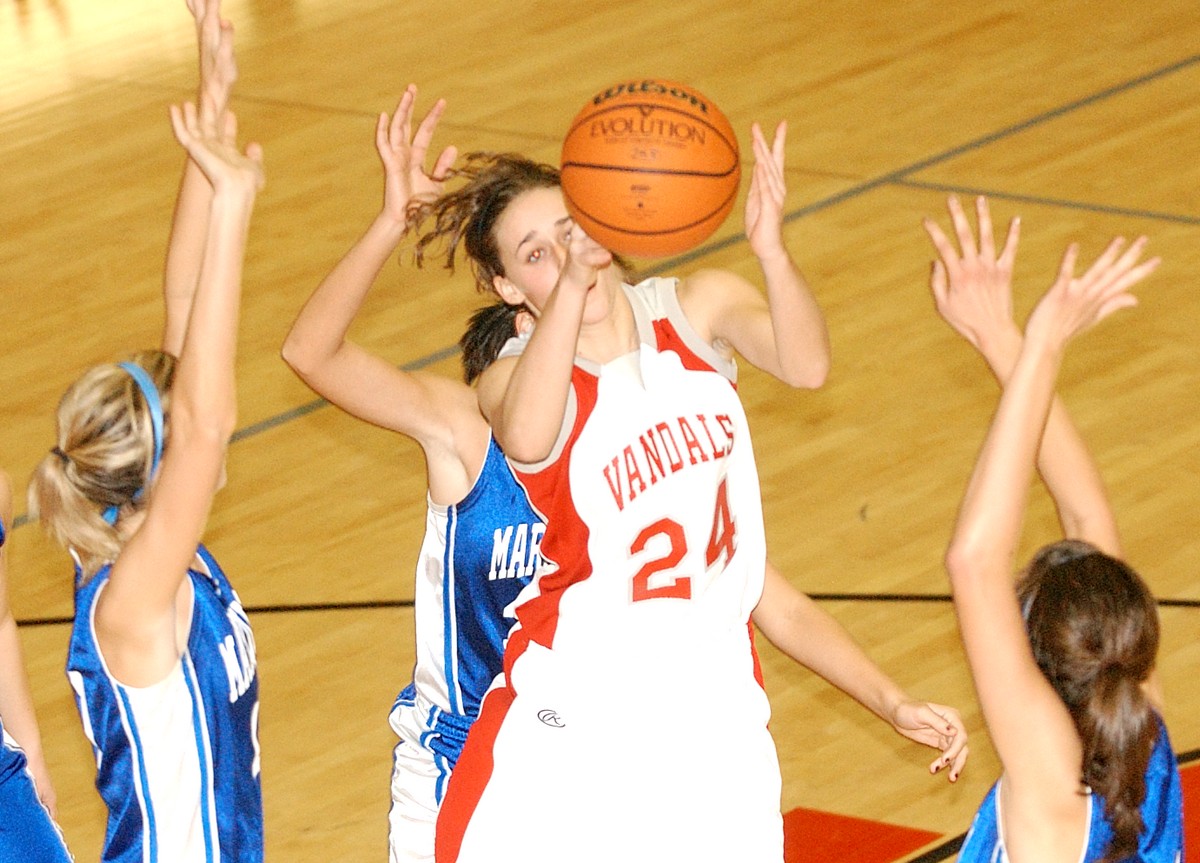 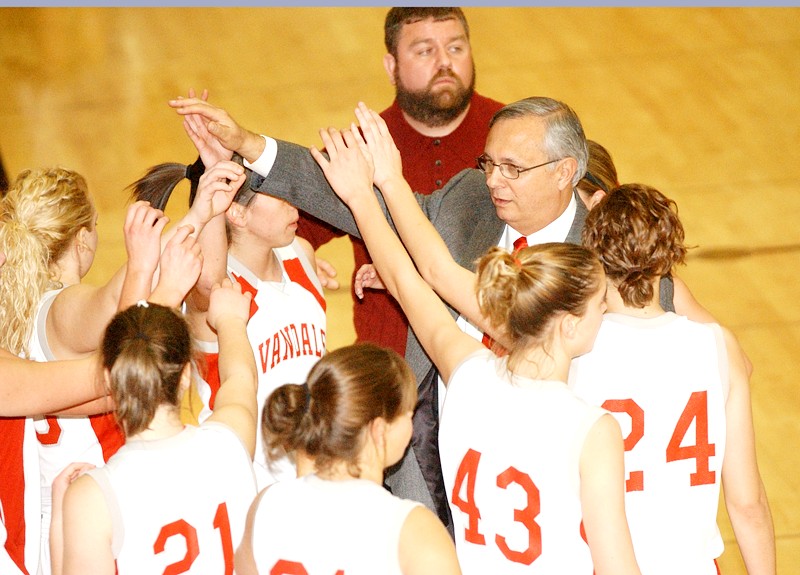 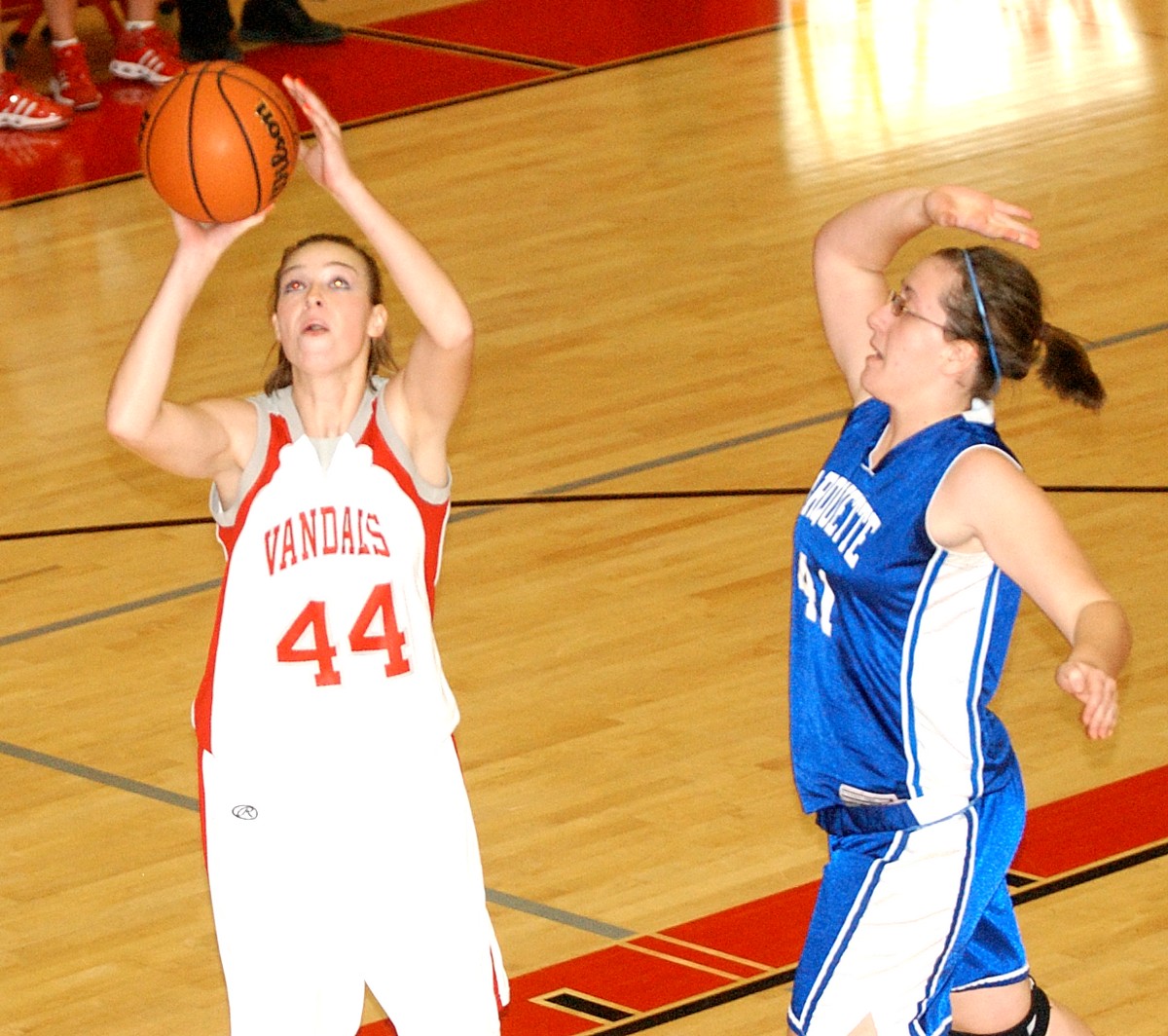 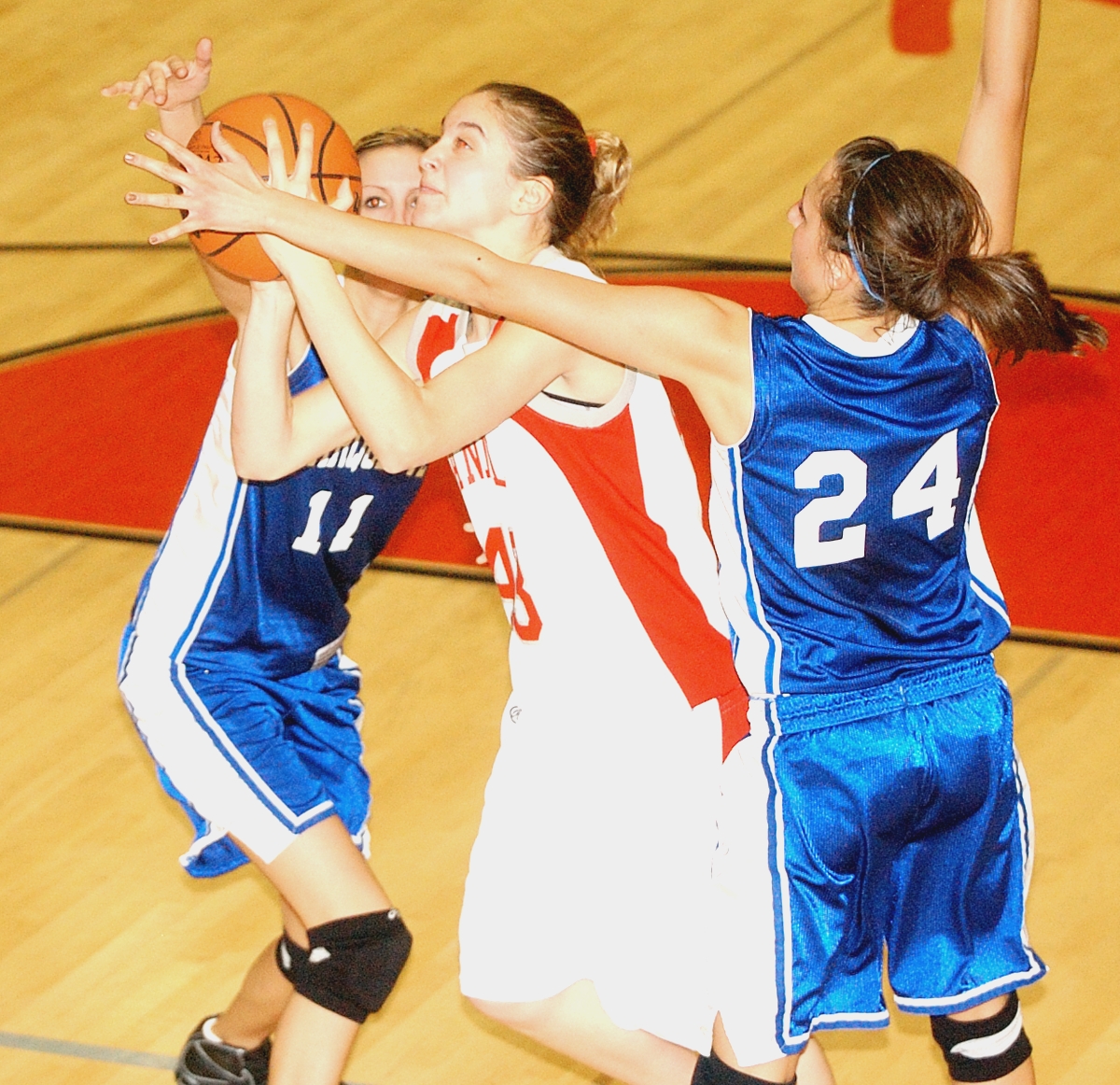 Vandalia senior Cassie Warner fights through a pair of Alton-Marquette defenders Monday at VCHS. Warner led the 2-0 Lady Vandals to a 63-29 victory by scoring 17 points, grabbing nine rebounds and coming away with two steals. 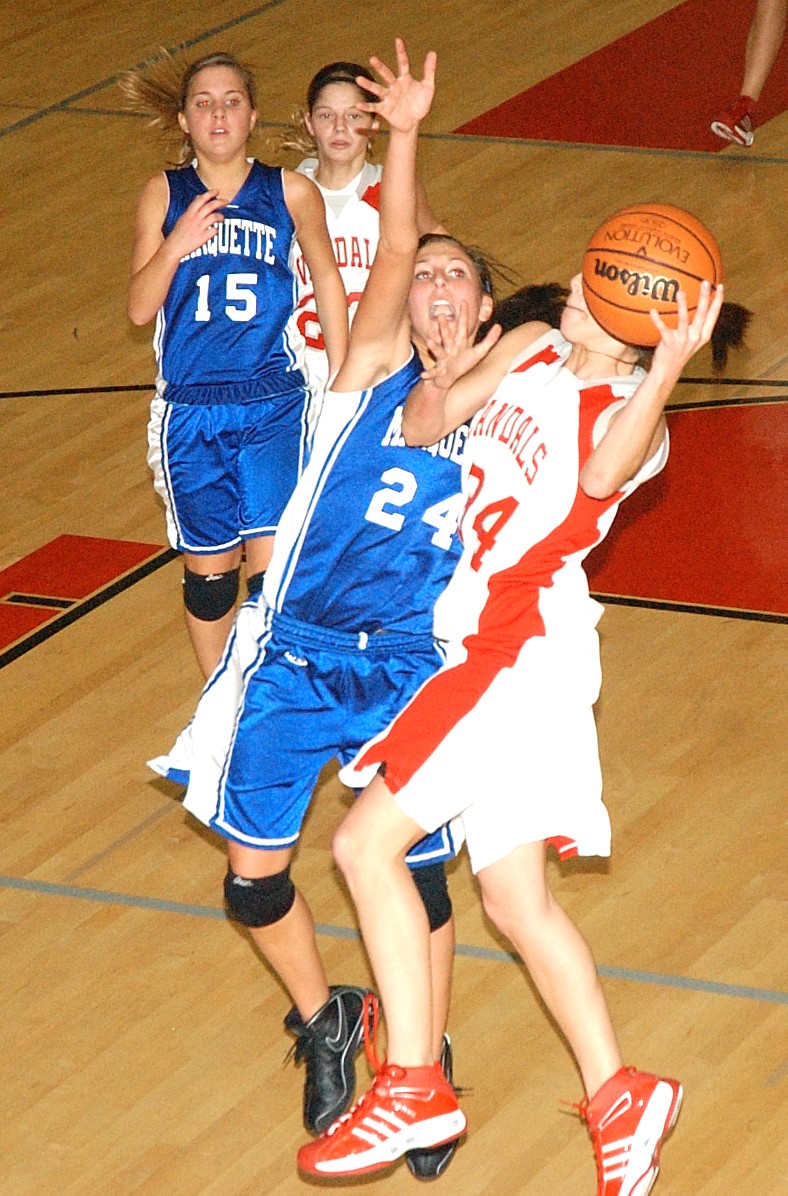